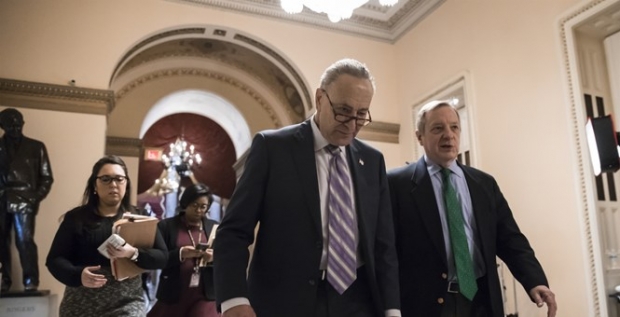 The government is potentially hours away from a shutdown if Democrats and Republicans are unable to compromise. The House passed a short-term spending bill that would keep the government open and continue funding the Children's Health Insurance Program (CHIP), which expires today. But Senate Democrats say they are unwilling to vote in favor unless it addresses the Deferred Action for Childhood Arrivals (DACA) program with protections for Dreamers.
As we do from time to time, we are updating some of our source ratings. Make sure to check out the media bias updates to The Daily Caller as well as Fox News. And stay tuned for Politico and the Daily Beast in the coming weeks.
Other news from AllSides:
Snippets from the Right
RNC Takes Democrats To The Woodshed Over Government Shutdown Theatrics
Townhall
"We’re less than 10 hours away from a government shutdown. In years past, Democrats have warned against a shutdown. How it would harm citizens, how the credit markets would get disrupted, how it breeds cynicism in government, how it’s shameful, and how it costs us billions, if not trillions, of dollars. So, why are they so hell-bent on shutting it down?
...
Speaker Ryan said last night that Democrats don’t oppose the House funding measure, but are holding the government hostage over immigration. Democrats have acted like the keepers of government in these battles, saying how irresponsible it is to close the government, so the Republican National Committee decided to play their greatest hits on a loop. Starring Nancy Pelosi, Chuck Schumer, Liz Warren, and Claire McCaskill, Shutdown Theater Part XII: The Great Hypocrisy is out."
Snippets from the Center
US shutdown: Senate bill on verge of collapse amid rancour
BBC News
"The Republican-controlled Senate's bid to avert a US government shutdown is teetering on the brink of collapse as it races against a midnight deadline. The House of Representatives voted 230-197 on Thursday night for a budget bill to extend funding until next month. But the upper chamber is set for a nail-biting vote, with Republicans and Democrats still split on immigration.
...
The main bone of contention has been Democrats' demands for more than 700,000 undocumented immigrants who entered the US as children to be protected from deportation. These 'Dreamers', as they are known, were granted temporary legal status under a programme established by former President Barack Obama. In September, Mr Trump announced he was ending the programme and allowing Congress until March to come up with a replacement.
...
A new Washington Post-ABC poll suggests that by a 20-point margin more Americans blame President Trump and his party for the imbroglio, rather than Democrats. But a shutdown would also be problematic for 10 Democratic senators who are up for re-election this year in states won by Mr Trump."
Snippets from the Left
Children’s health insurance has become a political hostage
Vox
"The Children’s Health Insurance Program is enduring an unprecedented crisis: More than 100 days ago, funding for a program that covers 9 million kids technically expired. Republicans in Congress haven’t rushed to extend it long-term — not until they could get something in return.
...
Republicans are sticking with this six-year CHIP extension offer, which they will note (correctly) is the longest extension in the program’s history by one year — but still far less than what Congress could do to avoid any future crises. They’ll even say they want leverage over the program in the future — not unlike the way they are using it now in their shutdown standoff with the Democrats.
...
After four months of criticism from Democrats over the failure to extend CHIP, Republicans are planning to pummel the minority if they hold up the spending bill now that the funding extension is attached to it. Indeed, House Republicans are trying to paint Democrats as heartless politicians who refuse to help children."
Discover more on this topic on AllSides.
Polarization, Politics, Political Polarization, News, Story Of The Week