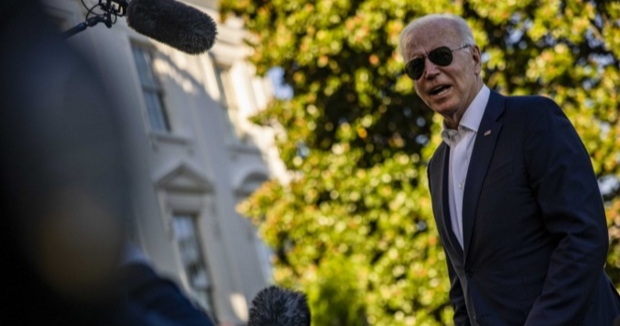 Congress is juggling two massive spending bills and the need to raise or suspend the national debt limit this week.

Both chambers of Congress passed a bill Thursday to keep the government funded through Dec. 3, but the harmony stopped there. There are progressives, centrist Democrats and Republicans who oppose passing the Biden administration's $1.2 trillion infrastructure bill or the $3.5 trillion budget plan for various reasons, and negotiations have largely stalled. Plus, the Treasury has warned lawmakers of a potential economic recession if the debt ceiling isn't raised by mid-October; Republicans have said Democrats are on their own in accomplishing that.

Many reports framed this week as critical for Biden's agenda, and suggested that failure to pass the bills and avoid a government shutdown would have significant negative consequences for Biden and Democrats. Voices across the spectrum are accusing each other of playing partisan politics instead of solving national issues. Right-rated voices remain critical of purportedly overpriced spending bills, and continue to warn of rising inflation and other economic fallout from increased government spending. Left-rated voices often criticized Republicans and moderate Democrats, accusing them of obstructing the spending bills and raised debt ceiling without good reason. 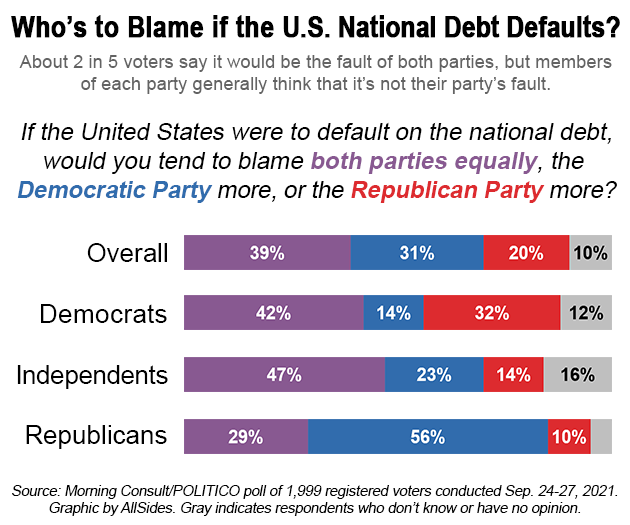 How you could feel the impact of a U.S. government shutdown

"Government services that are deemed essential — typically tasks important to safety and national security, such as border protection and air traffic control — would continue despite a shutdown. But the disruption would come at a sensitive time, with many Americans struggling to regain their footing amid the ongoing pandemic and the economy grappling with the effects of the COVID-19 Delta variant."

‘Non-starter’: Dems tangle over how to raise the debt ceiling

"There’s mass confusion among congressional Democrats about how the majority party and its slim majorities will avoid a potential default just three weeks away. Senate Republicans on Monday sank Democrats' plan to fund the government into December and kick the debt limit through the 2022 midterms, then they blocked an effort from Schumer to lift the debt ceiling by a majority vote on Tuesday."

"On the eve of the possible infrastructure vote, Mr. Biden met Wednesday evening at the White House with Mrs. Pelosi and Mr. Schumer. Mr. Biden also has held a series of meetings with moderate Democrats in recent days in a bid to lock down their support for the social-policy and climate bill. That, in turn, could mollify progressives’ fears that moderates would block that legislation."

What happens if the U.S. defaults on its debt?

"It’s important to note that no one knows precisely when the U.S. Treasury will run out of money to pay its bills, including bondholders, let alone what would happen next. U.S. sovereign debt generally has been considered the safest and most liquid to own in the world, and all kinds of financial market products and processes have been pegged to the orderly functioning of the nearly $21 trillion Treasury market."

"To enact the reconciliation bill, Democrats must secure a simple majority of 51 votes in the Senate, an increasingly unlikely scenario given that moderate Democrats Joe Manchin and Kristen Sinema have yet to be persuaded to back it. Both senators have refused to endorse the reconciliation package, mainly citing concerns with its exorbitant and unprecedented price tag."

Just Say 'Hell No!' to the Democrats' $3.5 Trillion Budget Disaster

"The Build Back Better budget resolution boasts a $3.5 trillion price tag. Taxpayers should be so lucky. This figure assumes that several key initiatives, including the child tax credit, will expire in three to five years. Since government programs are virtually immortal, this is not wishful thinking. It’s pure fantasy. Reasonably assuming that these programs grind on for 10 years swells the budget’s true price to $5.5 trillion."