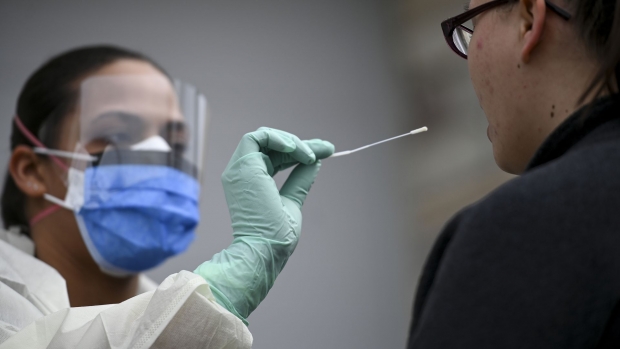 The spread of the COVID-19 coronavirus has sent shockwaves through the U.S., closing schools, suspending entire sporting seasons and contributing to a brutal week for the stock market.

President Donald Trump addressed the nation from the Oval Office Wednesday, announcing a 30-day ban on travel to and from the European Union. Cases of the virus have been confirmed in 44 states and Washington D.C. as of Thursday morning. Wash your hands" is plastered on posters and social media feeds throughout the country, and some employees and students are being told to stay home until further notice.

Media on all sides have focused on the virus extensively, including tips on self-care and virus awareness. Both the left and right have fielded criticism for their coverage; some say the left is stoking fear by concentrating on the virus too much, and others say the right is irresponsible for not framing the problem seriously enough.

Other stories on coronavirus this week from AllSides: Delays, Confusion Mark Coronavirus Testing in U.S.; Opinions: Trump and the Politics of Coronavirus; and Coronavirus Stunts Global Travel, Affects Airlines.

From the Blog: Coronavirus coverage differs greatly from left to right, which spells trouble for people reading news in a filter bubble. Meanwhile, people in the country illegally influenced recent primaries, earning praise from left media and critique from right.

"Congress' in-house doctor told Capitol Hill staffers at a close-door meeting this week that he expects 70-150 million people in the U.S. — roughly a third of the country — to contract the coronavirus, two sources briefed on the meeting tell Axios."

"That estimate, which is in line with other projections from health experts, underscores the potential seriousness of this outbreak even as the White House has been downplaying its severity in an attempt to keep public panic at bay. Dr. Brian Monahan, the attending physician of the U.S. Congress, told Senate chiefs of staff, staff directors, administrative managers and chief clerks from both parties on Tuesday that they should prepare for the worst, and offered advice on how to remain healthy."

Americans snap to attention on virus as big events canceled

"The nation snapped to attention on Wednesday as the new coronavirus was declared a pandemic, stocks slid into bear market territory and the American public finally began to come to grips with the outbreak. The NBA said it would suspend its season until further notice. President Donald Trump held a rare prime-time address from the Oval Office to calm the public."

"In the matter of hours Wednesday afternoon, the signs were everywhere. The NCAA announced that the rite of spring for so many Americans — its college basketball tournament — would be played before largely empty arenas. Around the same time, the White House scheduled a nationally televised address. News feeds lit up with cancellations of St. Patrick’s Day parades, major university systems in California, New York and elsewhere ending classes for the term and late night comedians making plans to film without live studio audiences."

The Facts on Coronavirus Testing

"President Donald Trump claimed on March 6 that anyone who “wants a test can get a test,” while Secretary of Health and Human Services Alex Azar said in a television interview the same day that there “is no testing kit shortage, nor has there ever been." Contrary to both men, we were told by the Association of Public Health Laboratories on March 9 that although things had improved since a week ago, “demand for testing is greater than the tests available.”"

"Former Vice President Joe Biden said on March 1 that the Trump administration didn’t “even have a test kit” for the new coronavirus. That’s not true. While the Centers for Disease Control and Prevention is widely viewed to have bungled the rollout of its viral test kits, there was a test kit at the time, and it had been successfully used by the agency and some states."

The first U.S. layoffs from the coronavirus are here

"Strong job growth and soaring financial markets have fueled the U.S. economic expansion over the past decade. Now the rapid market decline and initial layoffs are heightening fears that the longest economic expansion in U.S. history could come to a sudden end, just a month after unemployment stood at a half-century low. The Dow Jones industrial average lost 1,465 points, or 5.9 percent, Wednesday with every sector slumping after the World Health Organization designated the coronavirus a pandemic. The Dow closed in bear market territory, meaning it had shed more than 20 percent from its high less than a month ago."

"At the Port of Los Angeles, 145 drivers have been laid off and others have been sent home without pay as massive ships from China stopped arriving and work dried up. At travel agencies in Atlanta and Los Angeles, several workers lost their jobs as bookings evaporated. Christie Lites, a stage-lighting company in Orlando, laid off more than 100 of its 500 workers nationwide this past week and likely will lay off 150 more, according to chief executive Huntly Christie. Meanwhile a hotel in Seattle is closing an entire department, a former employee said, and as many as 50 people lost their jobs after the South by Southwest festival in Austin got canceled."

Coronavirus is hard on older people — and scientists aren't sure why

"Older adults appear to be more severely at risk from the new coronavirus, while young children seem to be largely spared — and understanding why could be crucial to treating people with the illness it causes, according to scientists. Much remains unknown about COVID-19, the disease caused by the coronavirus that is rapidly spreading around the world, but researchers have seized on a factor that seems to influence the severity of infections: the patient's age."

"In China, where the coronavirus first emerged, early research also suggests that the coronavirus may pose a graver risk to some populations over others. In a report released last month by the Chinese Center for Disease Control and Prevention, an analysis of 1,023 deaths out of 44,672 confirmed cases diagnosed through Feb. 11 found that 21.9 percent of deaths occurred among patients who were over 80 years old."

"The coronavirus outbreak, which began in China, keeps evolving at a dizzying speed. With the global case toll rising steeply (reaching over 125,000 on March 11), face masks flying off store shelves, borders around the world closing, and meetings, cruise itineraries, and the global economy upended by the virus, it’s no wonder questions and fears are swirling about Covid-19, as the disease is known."

"“We will see more cases, and things will get worse,” Anthony Fauci, director of the National Institute of Allergy and Infectious Diseases, told members of the House Oversight Committee on March 11. “How much worse … will depend on our ability to do two things: to contain the influx in people who are infected coming from the outside and the ability to contain and mitigate within our own country." There are now more than 1,300 cases, and more than 30 deaths, across the US. Meanwhile, outbreaks have been surging in South Korea, Italy, and Iran."

The Great Coronavirus War Is upon Us

"Remember, unlike our past human enemies, COVID-19 is invisible to the naked eye, even more so than the most stealthy terrorists or underground enemy agents. It does not leave a smell. It cannot be heard. It certainly cannot be touched ... It assumes that our experts will not learn how this new virus originated, how it spreads, and how it sickens or kills. So the virus hopes that we cannot effectively quarantine the sick, or at least not before a pandemic spreads."

"COVID-19 believes our progress, confidence, and sophistication are not our strengths but rather our greatest weakness, as our vanity and assumed invulnerability render us ripe for panic. The battle is upon us. But if we stay calm and rational, we can easily defeat the enemy, whose reputation is likely far scarier than its reality."

"China’s “cover-up” of the coronavirus cost the world community two months of time to respond, Trump National Security Adviser Robert O’Brien said Wednesday during a think-tank event. “Unfortunately, rather than using best practices, this outbreak in Wuhan was covered up,” he said at the Heritage Foundation in response to a question about China’s handling of the virus."

"He noted that as soon as the administration realized what was happening, it stopped travel to the U.S. from China — about 20,000 people a day ... Meanwhile, Chinese officials have begun claiming the virus did not start in China, despite Wuhan being the epicenter of the virus’ outbreak. For example, China’s ambassador to South Africa suggested in a recent tweet that the coronavirus did not originate from China".

Analysis in The Federalist

"Since the coronavirus came on the horizon, media figures have been stoking panic, leading to mass shortages of basic health supplies, business travel cancellations, and market drops, all while the confirmed disease number hiked yesterday to around 0.000002 percent of the U.S. population. So far, U.S. cases of the basic seasonal flu outnumber coronavirus cases by a factor of 45,000 (using federal stats for this year’s flu and real-time tracking of coronavirus confirmations). The flu season has even been especially bad this year, with between 20,000 and 52,000 deaths, compared to 29 so far from coronavirus."

"It is probably no accident that the media’s hysterical representation of what so far is a tiny health problem with the potential to grow — but we don’t know how much — mimics the accusations Democrat presidential candidates were making against Trump just two weeks ago. From Democrats’ lips to the media’s megaphone to a public frenzy in just two weeks."

Coronavirus, Story Of The Week, Public Health, Economy And Jobs, Banking And Finance