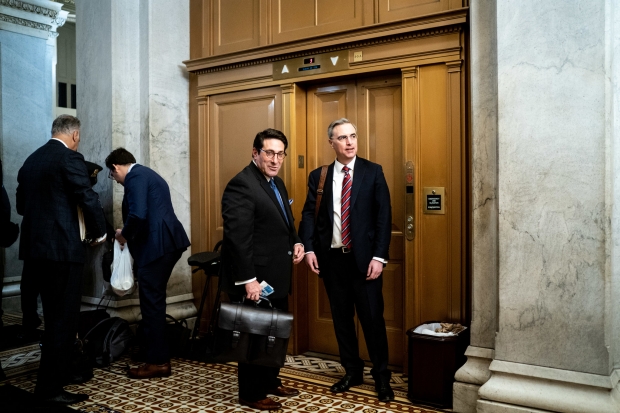 President Donald Trump's Senate impeachment trial began Tuesday, with each side using opening arguments to attack and diminish the opposition. In a call for civility Tuesday night, Chief Justice John Roberts scolded members of both parties after hours of bitter disagreements and partisan hardball.

Senate Majority Leader Mitch McConnell conceded an extra day of arguments to Democrats in an apparent agreement on rules to start the trial Tuesday morning; by Tuesday night, the Senate GOP began voting down proposed amendments, starting by defeating a subpoena for White House documents.

The divides visible on the Senate floor reflect a deeply split American public. Roughly 85% of eligible Democratic voters say the trial should end with Trump being removed from office; roughly 86% of Republican voters want Trump to remain president post-trial.

Other big stories this week from AllSides: Jeff Bezos' phone was reportedly hacked by Saudi Arabia in May 2018; over 20,000 gun rights activists peacefully protested proposed Virginia gun laws at the state capitol; the New York Times editorial board endorsed Senators Elizabeth Warren (MA) and Amy Klobuchar (MN) for president; and an independent watchdog found the Trump administration's hold on Ukrainian aid to be illegal.

Two legal teams with contrasting strategies face off in the Capitol

"In its opening days, the House managers have focused on the facts. They are trying to build a clear and coherent story around their theme that the president abused his power — delving into the details, putting up slides to summarize major points, and playing a well-organized selection of video clips of statements by Mr. Trump and by House witnesses."

"Eschewing props, the defense team has focused instead on the process. They have used their time to reinforce the House Republican theme that impeachment is a sham and unfair to Mr. Trump — urging the Senate to swiftly dispose of the case without subpoenaing any additional documents or testimony."

"Democrats forced 100 senators sitting as Trump's jurors to endure repeated and futile votes to over witnesses testimony and evidence, stretching well into the early hours of Wednesday morning and driving home their view that Republicans are thwarting a fair trial that would dig up the truth about the Ukraine scandal."

"Republican senators, forced to sit mostly in silence during the presentation, can no longer ignore the incriminating evidence against the President. Even still, stark political factors -- including Trump's stronghold on the GOP base -- mean there will be no surprises about how most of them plan to vote."

"As the chair of the Constitutional Convention and first U.S. president, Washington presided over the creation of the American political system, lending the nascent nation his dignity and virtue, his authority and sagacity. Today we celebrate core institutions but often take them for granted, assuming they will preserve our democracy. But as Washington shaped them, he understood their fragility. The endurance of the republic was no sure thing then, and it remains uncertain today — something the Senate should remember as it hears the impeachment trial."

"Trump’s impeachment trial in the Senate will be another test to see whether we are capable of democracy, willing to uphold the Constitution and rule of law and able to put country above personal or partisan gain, as Washington would have hoped. The contest pits “real patriots” against “tools and dupes.”"

"A little-used word dating back to the late 16th century — pettifogging — made a modern-day comeback at the first day of the impeachment trial of President Trump. Twitter and Google were abuzz Wednesday over the archaic adjective, which means “dishonest or unethical in insignificant matters; meanly petty,” according to Dictionary.com."

"“I think it is appropriate for me to admonish both the House managers and the president’s counsel in equal terms to remember that they are addressing the world’s greatest deliberative body,” Roberts said. “One reason it has earned that title is because its members avoid speaking in a manner and using language that is not conducive to civil discourse.”"

"Senate Chaplain Barry Black opened the second day of Donald Trump's impeachment trial with a plea for civility, asking senators to remember 'words have consequences.' His words followed Tuesday's marathon first day where arguments over the trial's procedures went on until after 1 a.m."

"House Judiciary Committee Chairman Rep. Jerold Nadler of New York scolded Republicans at one point: 'The question is whether the Senate will be complicit in the president's crimes by covering this up?' ... The president's lawyers responded furiously, with Pat Cipollone retorting: 'The only one who should be embarrassed Mr. Nadler, is you, for the way you addressed the United States Senate.'"

"The attacks of the Democrats on Trump never made any sense. First, they tried to portray him as an unpatriotic shill for Putin. Never mind that Trump ran on an explicitly America First agenda. Never mind that he won the presidency with the votes of the most patriotic Americans. Never mind that once in office he conducted a Russia policy far tougher than Obama’s."

"Suddenly the Democrats got very starchy and serious about a document they normally tell us is flexible and “living.” Sounding like pious originalists, they quoted the Founding Fathers reverently — the same Framers whom they usually dismiss as irrelevant racists and sexists whose views don’t belong in modern courts. It is the policy of the Democrats to put on courts judges who disregard a literal reading of the Framers’ words. The whole liberal notion of a “living Constitution” is to render the actual one meaningless."

Senators dig in as Democrats outline case for Trump impeachment

"In their first day of opening arguments, House Democrats argued that Mr. Trump’s efforts to press Ukraine to open investigations that could help him politically warrant his removal from office. Under the rules governing the trial, the House managers and the White House defense team each have 24 hours spread over three days to make their arguments."

"Many Republicans, Mr. Trump and members of the president’s defense team have repeatedly dismissed the entire impeachment process as an overblown political assault by Democrats. They said that Democratic arguments that Mr. Trump withheld nearly $400 million in military aid to Ukraine as leverage to prompt the country to open an investigation into former Vice President Joe Biden fell flat."

Mark Penn for The Hill

"We are facing an impeachment shutdown — the road-blocking of all our government’s institutions for an impeachment that is going nowhere. It will inflame passions, divide our country further and accomplish nothing of any significance. The cast is now complete with shady characters, wronged bureaucrats and impeachment prosecutors preening for their close-ups on national TV."

"Let us not forget that the Trump administration suffered through a two-year special counsel investigation based almost entirely on opposition research from the other party, and that this imbroglio stems from the other party believing it had now in turn found information that would turn the political tables. It is all exactly as George Washington foretold."

"Overall, the public is slightly more likely to say the Senate should convict and remove Trump from office than to say it should not, 45% to 40%. But a sizable percentage, 14%, say they don’t know enough to have an opinion."

"About 8 in 10 Republicans think the Senate should not convict and remove Trump from office, compared with roughly the same share of Democrats who say Trump should be convicted and removed. Overall, confidence in the Senate to conduct a fair trial of the president is limited, though Republicans are more likely than Democrats to say it will be a fair trial."

Story Of The Week, Impeachment, US Senate, White House