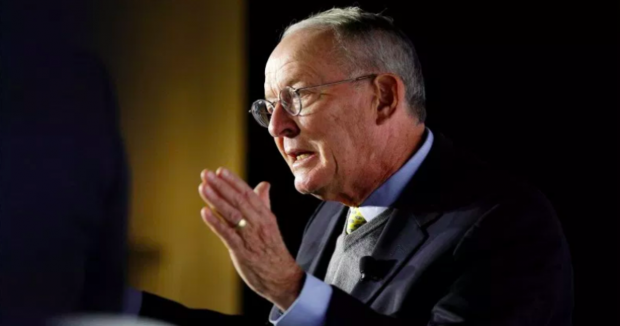 The Senate voted to block President Trump's national emergency declaration for border wall funding, with 12 Republicans joining Democrats in passing a resolution to reject the move. The vote is slightly symbolic, as Trump will likely veto the measure.
The move divided conservatives in particular, with some accusing Trump of executive overreach. Others argued his declaration was necessary to ensure border security in the face of a Democratic House majority, who some have characterized as obstructionist.
What America Do We Want to Be?: Join Living Room Conversations, our civil dialogue partner, and America Indivisible for a nationwide conversation on April 13, Thomas Jefferson’s 276th birthday. "Reckoning with Jefferson: A Nationwide Conversation on Race, Religion, and the America We Want to Be" will be held via in-person and online video discussions. Sign up today!
Check out some other big stories this week: Paul Manafort Sentenced to 47 Months in Prison, Trump Proposes $4.7 Trillion Budget for 2020, and Several Advertisers Pull Ads From Fox News Programs Hosted by Pirro, Carlson.
Snippets from the Right
Emergency-Declaration Rebuke Splits Senate GOP
National Review
"The Senate GOP dissenters — Lamar Alexander, Roy Blunt, Susan Collins, Mike Lee, Jerry Moran, Lisa Murkowski, Rand Paul, Rob Portman, Mitt Romney, Marco Rubio, Pat Toomey, and Roger Wicker— ran the ideological gamut from conservative to moderate. Most argued that the president was operating outside the rule of law, while some simply called the emergency declaration an executive overreach that Congress had a duty to stop."
Actually, we can’t afford not to build the Wall
New York Post Opinion
"Democrats claim it’s a waste to spend billions on a wall. But the facts show that we can’t afford not to build it. As the cover of the president’s new budget says, 'taxpayers first.'”
Sasse, Cruz, and Tillis: Trump's three amigos
Washington Examiner Editorial Board
"Trump is trampling on the principles of the Constitution with his declaration, even if he may have the legal right because Congress delegated it by statute. Every conservative should have supported the resolution of disapproval that just passed the House and Senate. Many did, but too many did not."
Snippets from the Left
Congress Has a Breaking Point. This Week, Trump Might Have Found It
New York Times
"The series of votes vividly demonstrated a newfound willingness to stand up to the president among some of his Republican allies on Capitol Hill. And they underscored a deep frustration in Congress about the president’s supposed scorn for a coequal branch of government."
A dozen Republican senators show some spine. It won’t be enough.
Washington Post Editorial Board
"Fundamentally, though, what we will have witnessed if the veto is upheld is the failure of enough congressional Republicans to stand up to Mr. Trump and the voter base that responds to his bursts of demagoguery on Twitter, even at the expense of their constitutional authority and erstwhile principles."
Senate Republicans see the national emergency vote as a one-time break with Trump
Vox
"While Republican lawmakers undoubtedly need the president’s support to advance policies they’ve long prioritized, like tax reform, there’s also another big reason some have held off on confronting Trump: They’re worried about what opposing him could mean for their own future elections."
Snippets from the Center
Senate Passes Resolution to Block Trump’s Border Emergency
Wall Street Journal
"Mr. Trump declared the emergency at the border last month, using it as part of his plan to divert $6.7 billion to build more barriers on the border with Mexico, after Congress authorized only $1.38 billion. The move immediately drew bipartisan objections, with lawmakers saying the president was overstepping his Constitutional authority."
12 senators break with President Trump, vote to end his border emergency; veto expected
USA TODAY
"The president, who had lobbied hard in recent days to keep Republicans in line, responded with a single-word tweet after the vote.
'VETO!' was all he wrote."
Senate Republicans revolt against Trump over border
BBC
"Congress needs a two-thirds majority of both chambers to override a presidential veto, which is viewed as unlikely in this case.
Nevertheless, the vote will be seen as an embarrassing loss for the president on his signature domestic issue."
Discover more on this topic on AllSides.
US Senate, Donald Trump, Immigration, Border Wall, Story Of The Week, News