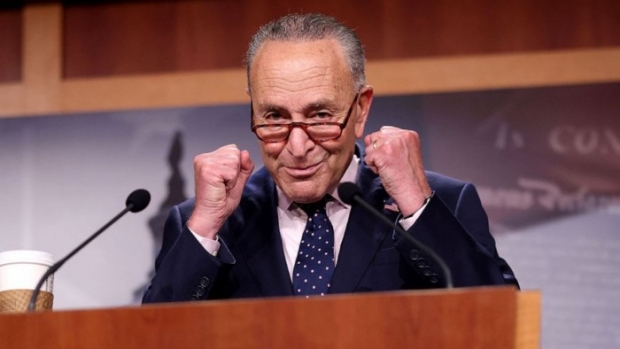 The Senate passed the Biden administration's $1 trillion infrastructure package Tuesday, and the next day approved Democrats' framework for a $3.5 trillion budget plan. The infrastructure vote was bipartisan, 69-30 — the bill will provide funds for highways, broadband and sustainability-focused assessments. Meanwhile, the budget vote was hyper-partisan, 50-49. Some Republicans say the plan is too expensive and relies too much on tax hikes, and some progressive Democrats in the House oppose passing the infrastructure bill until the budget bill is approved. Senators will work on the final budget in the coming weeks.

Coverage across the spectrum speculated about the future of both the infrastructure bill and the budget plan, and which lawmakers might be key in approving or opposing them. Reports from left-rated outlets more often focused on how the spending plans would help impoverished communities and social inequity. Coverage from right-rated outlets typically framed the budget as excessive and wasteful.

'Delicate dance': Manchin and AOC hold the keys on infrastructure

"Biden’s opportunities for major legislative victories, bipartisan or otherwise, will dwindle after this year. Both parties will then be consumed with the midterm elections, making Republicans unwilling to cooperate and Democrats hesitant to take tough votes."

The Biden Blowout Is Just Beginning

"The sheer numbers here are jaw-dropping. Including the $1.9 trillion so-called COVID-19 relief bill from earlier this year, Biden wants to spend nearly $6 trillion in three measures passed within months of one another. In 2019, by point of comparison, the entire federal budget was $4.4 trillion (and at the time, President Trump wasn’t exactly tightening the country’s fiscal belt)."

"Moderate Democrats and Republicans in the House have rallied behind the bipartisan $1.1 trillion infrastructure agreement in the Senate and are among its most vocal supporters in the chamber, but they want Pelosi and Democratic leaders to put the Senate bill on the floor without changes, so it can pass quickly and head to President Biden’s desk."

Democrats’ infrastructure gamble actually seems like it could be working

"So far, however, the Senate has managed to keep things moving on both tracks, a sign that this approach could wind up working after all. Doing so has been a tenuous balancing act — one that required Democrats to cut the size of their ambitions on more traditional infrastructure, and for Republicans to accept adding about $250 billion to the federal deficit over a decade."

"Manchin has previously raised concerns about the debt and Republicans are warning that the spending plan, combined with the $1.9 trillion coronavirus bill, is driving concerns about inflation...But his new statement comes only hours after Senate Democrats approved a budget blueprint that includes the $3.5 trillion top line and broad instructions for drafting the spending plan Democrats want to pass this fall without GOP votes."

"Whereas the $1.2 trillion infrastructure bill is expected to include more than $550 billion in spending on “core” infrastructure, including roads, bridges, public transit, airport and broadband, Democrats also want a reconciliation bill that will include their longstanding policy priorities."