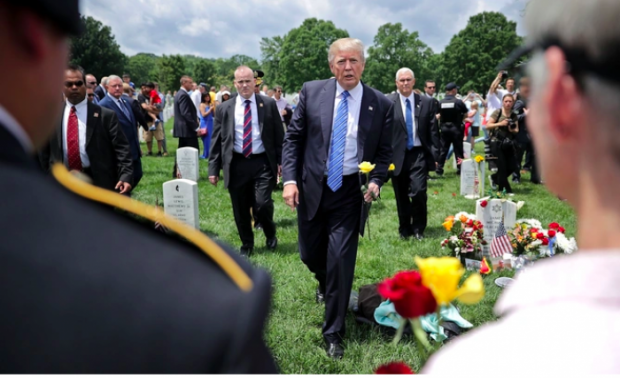 An article published Wednesday by the Atlantic cites anonymous sources who claim President Donald Trump made disparaging comments about the U.S. military and fallen service members, and expressed coldness toward military ceremonies. The president denied the report, and more than 20 former and current administration officials have refuted some or all of the allegations.

Discussions followed on both sides about bias and the use of anonymous sources. Some other left- and center-rated sources independently verified the claims through anonymous sources; many left-rated voices framed the claims as truth. Coverage from right-rated outlets focused more on purportedly credible denials from officials who were reportedly present when the comments were allegedly made. Some right-rated voices criticized the Atlantic and others for allegedly conspiring to damage Trump's reelection chances.

On the Blog: On the heels of the allegations, many are waiting for confirmation or denial from former Marine Corps Gen. John Kelly, the president's former chief of staff; and in a case of media bias by photo, The Hill faced criticism for misleading imagery regarding a recent Trump campaign rally.

More from AllSides: We've recently updated our media bias ratings for three major news sources — the Associated Press, BBC News and Bloomberg; AllSides created a Facts and Fact Checking portal, where you can see the latest fact checks on a variety of topics and issues; you can also now support our work and mission by becoming a sustaining member of AllSides. Sustaining memberships allow you to read AllSides ad-free.

Trump and the military: Will the allegations hurt him?

"The report has also forced Trump to spend several days refuting the allegations, which costs him precious time that could be used getting his own message out as the election rapidly approaches. Others are skeptical the report will have much of an impact on the election. A sizable portion of his core supporters will be convinced by Trump’s denials. And some voters will be skeptical of quotes attributed to anonymous sources when Trump’s allies have gone on the record to defend him."

Here’s why you should be willing to believe anonymous sources

Trump: Americans Who Died in War Are ‘Losers’ and ‘Suckers’

"There was no precedent in American politics for the expression of this sort of contempt, but the performatively patriotic Trump did no damage to his candidacy by attacking McCain in this manner. Nor did he set his campaign back by attacking the parents of Humayun Khan, an Army captain who was killed in Iraq in 2004."

"Ironically, after the publication of the well-known May 2016 article in The New York Times Magazine in which former Obama administration Deputy National Security Advisor Ben Rhodes essentially admitted he had manipulated the media regarding the Iran nuclear deal, Goldberg attacked David Samuels, the freelancer who had written the article, for writing, “For those in need of more traditional-seeming forms of validation, handpicked Beltway insiders like Jeffrey Goldberg of The Atlantic and Laura Rozen of Al-Monitor helped retail the administration’s narrative.”

"Throughout the long weekend, skeptical journalists cast serious doubts on the Goldberg’s standards and methods, and on what passes today as “confirmation,” but for those outside the media industry it’s a he-said-she-said with potentially serious political consequences for the president. So what exactly did The Atlantic and its legions of friends do wrong here and why can’t we believe this reporting on its face? The answer could fill a semester of basic journalism school, but boiled down: poor sourcing practices, confirmation bias, and an echo chamber’s misleading “confirmations” dominated the cycle."