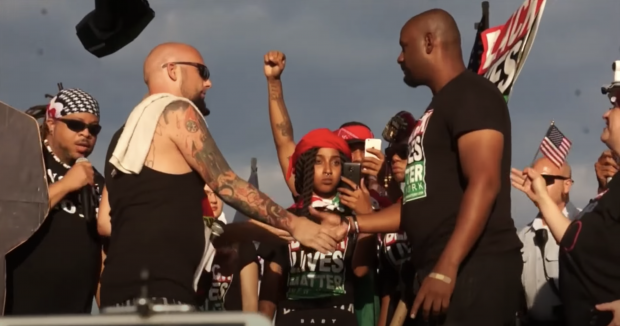 “If we really want America great, we do it together.”

-- Black Lives Matters leader, after having been invited onstage at a conservative rally.

”Hawk Newsome stood defiantly with his fist in the air on the Mall in support of the Black Lives Matter movement and began to sweat, wondering if violence was about to break out at yet another political rally" (From a Washington Post report).

On 2017 as the President of Black Lives Matter of Greater New York, Hawk had shown up with just a small handful of other supporters (8 to be exact) to take a stand before a conservative audience of approximately 1000, attending an event billed as the Mother of All Rallies (MOAR). Amidst this crowd of largely white Trump supporters, Hawk stated afterwards, "I expected hostility. I expected anger. I even expected the possibility of violence..."

But something else happened. Hawk ended up on the stage near the Washington Monument with two minutes to share his message. Although they got the predictable resistance from many, the event organizer, Tommy Hodges, said the following to Newsom's group, with all eight of them onstage beside him:

So you guys know that the ‘Mother of All Rallies’ was to end the political violence. It’s about freedom of speech. It’s about celebration. So what we’re going to do is something you’re not used to, and we’re going to give you two minutes of our platform to put your message out. Whether they disagree or agree with your message is irrelevant. It’s the fact that you have the right to have the message. It’s your right to say what you believe. And it’s their right [referring to the conservative crowd] to let you know what they think about what you’re saying.

Then he handed the microphone to Hawk. Here’s what he had to say:

I am an American. And the beauty of America is that when you see something broke in your country, you can mobilize to fix it. So you ask why there’s a Black Lives Matter. Because you can watch a black man die and be choked to death on television and nothing happens. We need to address that. We are not anti-cop. We are anti-bad cop. We say if a cop is bad, he needs to get fired like a bad plumber, a bad lawyer, like a bad** politician! [Responding to a shout of "all lives matter"] You are so right, all lives matter, right? But when a black life is lost, we get no justice. That's why we say black lives matter. If we really want America great, we do it together.

More than just inviting him up on stage, the organizer had tried to persuade the crowd to give him a fair hearing. Given the larger atmosphere at the event, Hawk later admitted, "the one thing I did not expect was an invitation to speak on that stage.” After after the event, Hawk seemed "shell-shocked" - telling a reporter, "What the ** just happened?"

As Carla Herreria wrote afterwards "This isn’t something you see very often" in an article entitled, "Trump Supporters Invite Black Lives Matter On Stage In A Rare Moment Of Unity." Whereas many assume civility only involves moderate feelings and quiet voices, here, passion had just met passion — in a productive way. Is it possible to bring even our frustrations and deepest concerns into productive exchange?

The video clip of this moment shared between two very passionate movements was quickly viewed millions of times - prompting thousands of supportive comments in what a Washington Post journalist Kelyn Soong called "a rare instance of unity and civility in today’s toxic political climate."

Clearly, this country is hungry for reminders that this is still possible.

In a follow-up interview, Hawk compared previous times when he had engaged with rage, to this moment. After seeing the thousands of positive comments on his Facebook feed (including from people who would have never supported his movement before), he reflected on the personal impact of seeing so much support: "You tell me if there are more people on the side of love and understanding, than on the opposite side of that."

As one person wrote online, "Progress! It's happening...Remember Martin Luther King, Jr's famous words? Darkness cannot drive out darkness: only light can do that. Hate cannot drive out hate: only love can do that."After the event, Hawk said the moment “restored my faith in some of those [conservative] people" - adding, "I feel like we made progress. Two sides that never listen to each other actually made progress today. If not on a grander level, but just person to person, I think we really made some substantial steps without either side yielding anything.”

As is obvious in the video, the moment was not all roses - with plenty of ugly remarks made (and additional hostility online afterwards). Indeed, even though the moment brought applause from millions of Americans, some other leaders of the Black Lives Matter were critical - seeing the perceived unity and common ground as potentially undermining the larger movement they were advancing.

Despite all this, it's hard not to appreciate some beautiful glimpses emerging from the event. For instance, Kenny Johnson, one of the leaders of Bikers for Trump's Northwest Florida chapter, said afterwards "I feel what he said came from his heart when he got on the stage...I probably agree with 90 percent of what he said. I listened to him with much love, respect, and honor, and I got that back, so as far as I'm concerned he's my brother now." Kenny even asked Hawk to pose for pictures with him and his five-year-old son.

In an interview with CNN's Carol Costello, Hawk said, "Everyone feels the same way - we are on the verge of a civil war. And the only way to avoid that is to talk with each other...at some point, we're going to have to talk to the other side. We're all rational Americans at our core, who care about our country and despise injustice. At some point, we have to clear away the rhetoric and really speak to each other as people."

Costello then asked Hawk, “Would it be possible for both of you to get together and go on a speaking tour - to show there can be a dialogue from two people who disagree with each other?"

We know it's possible because we've seen it over and over again. We also know that it changes everything.