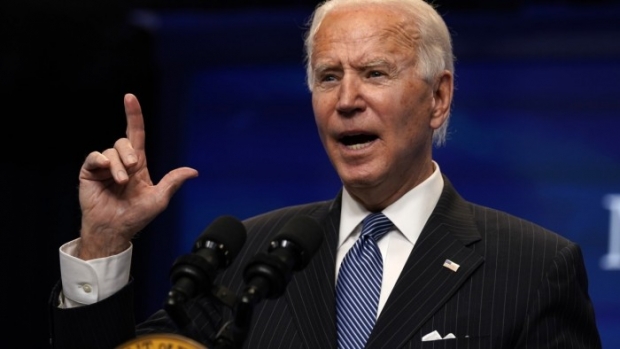 Newly-elected President Joe Biden had a busy first week in office. He signed nearly 30 executive orders, taking action on criminal justice, climate change, racial equity, immigration and more. On Tuesday, he announced plans to buy 200 million more COVID-19 vaccine doses, and reiterated his intent to accelerate vaccine distribution and inoculation. The young administration has also discussed the issue of domestic terrorism and how the federal government can do more to combat it.

Overall, coverage of Biden's first week in office was generally positive or neutral from left-rated sources, and more negative or skeptical from right-rated sources. Reports from left-rated outlets generally focused more on the details of the executive actions, especially those on race issues and climate change; some painted Biden's moves as welcome reversals of Trump-era policies. Some coverage from right-rated sources framed Biden's early behavior as authoritarian and compared his use of executive orders to past presidents; many also concentrated on pushback to Biden's announcements and apparent contradictions between his orders and his rhetoric during the presidential campaign.

On the Blog: Here's a look at how we can make civility and kindness in political campaigns more common; and in his inauguration remarks, Biden didn't say everyone needs to be committed to healing partisanship — just that "enough of us" do.

Other news and more from AllSides:Version 4 of the AllSides Media Bias Chart™ is here! See what's changed about our ratings; Download the AllSides mobile app for balanced news on the go. Available for iOS and Android; and you can support our work and mission by becoming a sustaining member of AllSides. Sustaining memberships allow you to read AllSides ad-free.

"President Biden's lament Friday that there is "nothing we can do" to alter the trajectory of the coronavirus pandemic stood in contrast to previous declarations that he would defeat COVID-19. During the campaign, Biden exuded greater optimism about his ability to tackle the problem, releasing a "seven-point plan" to "beat COVID-19" and promising "decisive public health and economic steps necessary to get the virus under control.""

"Some of the orders have already drawn widespread scrutiny, such as the decisions to rejoin the Paris Climate agreement and to cancel the Keystone XL Pipeline, which is expected to put thousands of jobs at risk and undermine the U.S. relationship with Canada. The Biden admin has also met with backlash for embracing a quasi-Marxist critical race theory in its policies seeking to prioritize certain racial groups that have historically met with disadvantage over others."

Biden aims for most ambitious US effort on climate change

"In the most ambitious U.S. effort to stave off the worst effects of climate change, President Joe Biden is aiming to cut oil, gas and coal emissions and double energy production from offshore wind turbines through executive orders Wednesday. The orders awaiting his signature target federal subsidies for oil and other fossil fuels and halt new oil and gas leases on federal lands and waters."

Biden made a lot of promises about race. Can he keep them?

"Now in the White House, Biden aims to answer that call by delivering on promises to address systemic racism in housing, jobs, education, criminal justice and voting rights. After he won, Biden told leaders of civil rights groups that racial justice was going to be part of everything he did."Not one or two issues on the side," said Marc Morial, CEO of the Urban League. "We take him at his word and hold him to it.""

The caravan hoped for change. But it’s not all up to Biden.

"But despite some quick actions during President Biden’s first week in office – including the suspension of new admissions to the Migrant Protection Protocols (MPP) policy, which forced asylum-seekers to remain in Mexico awaiting U.S. court hearings – it’s unclear how immigration enforcement might shift in the region. Historically, U.S. policy on migration has strongly informed its neighbors’. Yet containment is easier than a holistic approach that might require increased budgets and public policies, observers say."

"Joe Biden has only been president for a couple of days, but already his critics on social media are saying the country has fallen apart during his tenure. A reader pointed us to a Facebook post dated Jan. 24 that promised to “take a look at the Biden/Harris administration” and what it had done in its first few days. The post was also flagged as part of Facebook’s efforts to combat false news and misinformation on its News Feed. (Read more about our partnership with Facebook.)"