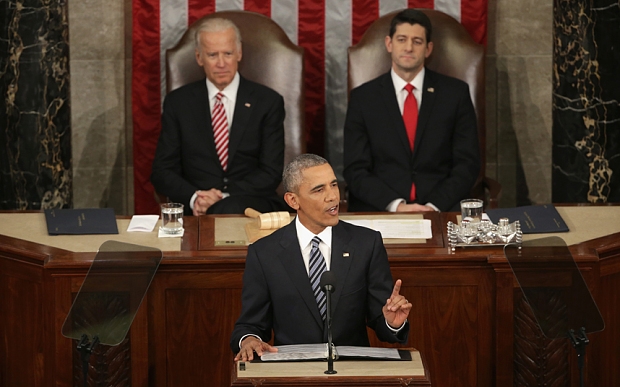 In the State of the Union (SOTU) this week, President Obama expressed personal regret over the polarized state of Washington, and he put forth some ideas of how the nation can reverse this trend. On the same day, a Real Clear Politics story came out entitled Census 2015 Shows Increasing Cultural Division and Political Polarization. The article reports, “…the tendency is continuing for Americans and immigrants to seek out others of their own kind, and for people of differing cultural values and political views to choose to live in different states and communities. All of which suggests that today's political polarization is not going away any time soon.”
While AllSides has a large collection of diverse stories on the 2016 SOTU, today we’re focusing specifically on SOTU analysis related to the issue of polarization.
See other news featured by AllSides such as GOP Debate in Charleston Tonight, El Chapo Recaptured, Veto of Obamacare Repeal and the latest AllSides News.
Snippets from the Right
‘Hope and Change’ eight years on: Time for Obama’s final State of the Union
American Enterprise Institute
“Hope springs eternal, as Alexander Pope noted, but he never endured seven years of Barack Obama’s version of Leninism: Any action that advances his goals is justified.  But the last State of the Union address of his presidency looms, and one hopes against all reason that the president will say the following words:
‘I have exceeded the actual powers vested in my presidency, particularly in terms of the faithful execution of the laws.  This has corroded the separation of powers and the distinction between legislative and executive functions.  The result has been increasing bitterness, a polarization of the body politic, and a danger that my successor will move the nation even further down this destructive path.  And so I am announcing tonight that I will limit my actions over the next year to those authorized explicitly by Congress.  As I began my presidency on a platform of hope, so do I intend to end it similarly.’”
Snippets from the Left
Obama’s Plea to ‘Fix Our Politics’ Leaves Both Sides Looking Inward
New York Times
“Congressional Republicans, stunned by Mr. Obama’s victory in 2008 and the ability of Democrats to win a supermajority in the Senate, quickly discovered that they could reap political benefit from united opposition to the president. So when Mr. Obama faced a financial system in tatters and an automobile industry on the brink of collapse in early 2009, he developed an economic stimulus package and pushed it through almost entirely with Democratic votes.”
…
‘It used to be a very positive thing for a member of Congress to say, ‘I can work with the president of the United States,’  said former Representative Vin Weber of Minnesota, a Republican strategist. ‘Now there’s no margin for that’ for a lawmaker of the opposite party.
‘Even if it were possible, the grass roots have become so polarized that it’s now seen as a negative, even dangerous,’ Mr. Weber said.”
Snippets from the Center
A State of the Union for the Age of Polarization
The New Yorker
“He closed his final State of the Union with a long discussion of polarization—the riff, which began with a meditation on the phrase ‘We the People,’ seemed to be something that he wanted remembered. He said that the “rancor and suspicion between the parties” was “one of the few regrets of my Presidency,’ and that ‘there’s no doubt a President with the gifts of Lincoln or Roosevelt might have better bridged the divide.’
The fascinating, unresolved question about polarization—in many ways it is the great question of this Presidential election—is whether the bitter atmosphere is an artifact of politics alone, or whether the country itself is more deeply split. Last night, the President’s view appeared to have grown more complicated. ‘Democracy does require basic bonds of trust between citizens,’ he said. The problem wasn’t simply Washington. He mentioned several reforms that he thought would help. Then he said: ‘I can’t do these things on my own. Changes in our political process — in not just who gets elected but how they get elected — that will only happen when the American people demand it. It will depend on you.’”
Discover more on this topic on AllSides.
News, State of the Union, Barack Obama