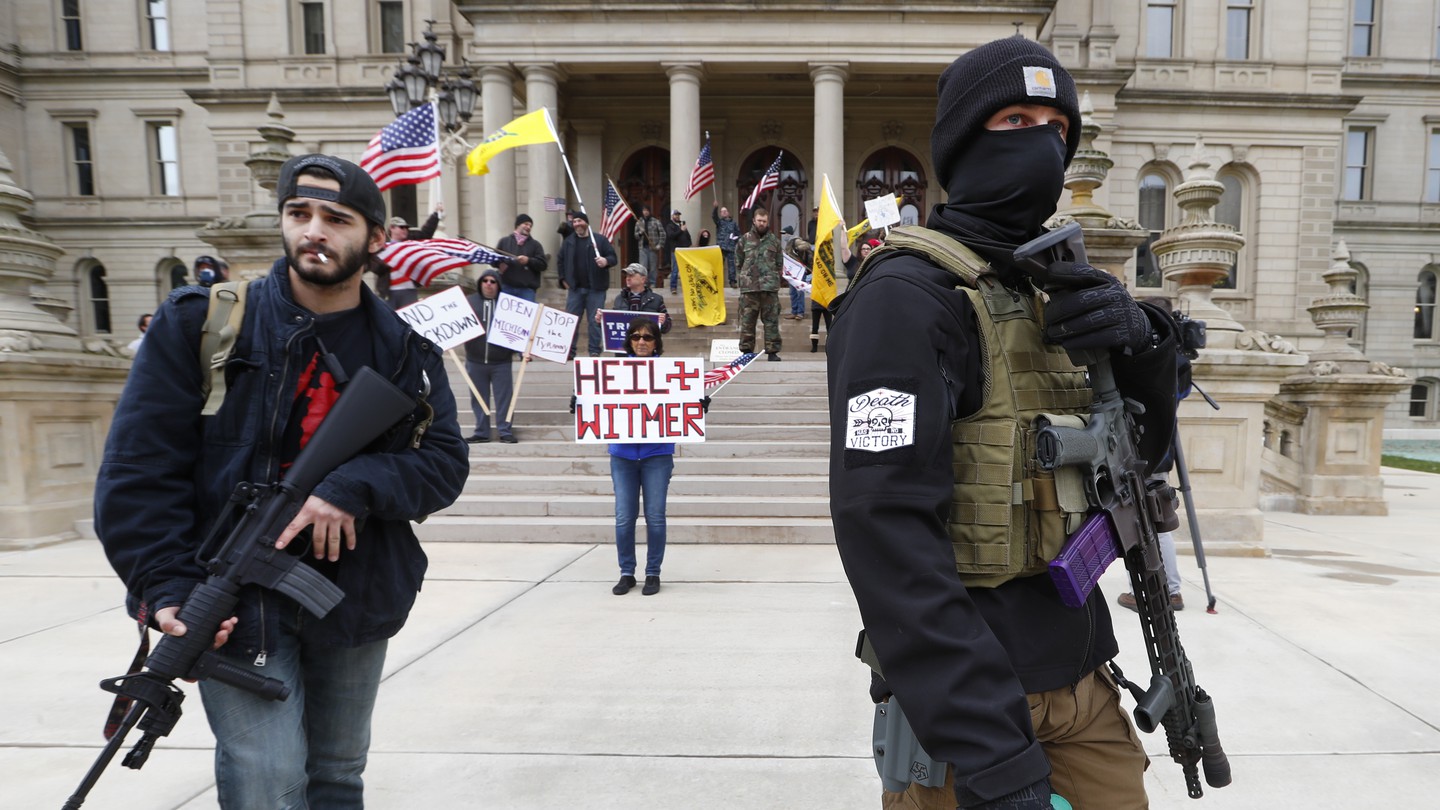 Protests against lockdown measures and social distancing guidelines happened throughout the U.S. in the past week, as people grow restless with the coronavirus-induced economic shutdown.

Some protesters still followed physical distancing guidelines, while others did not. Top health officials have advised against the latter. Meanwhile, several states have revealed plans to begin reopening certain businesses as early as this week.

Left-rated reporting generally framed the protests as far-right operations aimed at drumming up support for President Donald Trump and conservative policy goals; some right-rated outlets examined arguments for reopening the country soon, or explored apparent fabrications of details about the demonstrations.

Other stories this week from AllSides: The president said he'd temporarily suspend immigration into the U.S.; the price of oil went below $0 on Monday for the first time ever; and conflicting reports arose regarding North Korean leader Kim Jong-un's health, with some saying he's in "grave danger" following surgery.

February 2020 Blind Bias Survey: We recently conducted a blind bias survey to review the bias of the Associated Press, The Hill, NPR (online news), Washington Examiner, and Washington Post. See how the results impacted our ratings!

Make it through this pandemic with your health and sanity intact. Get the latest COVID-19 coronavirus data, balanced news, information on staying healthy and more.

"Trump last week tweeted calls to "liberate" numerous states with stay-at-home orders, although on Wednesday, he criticized Georgia's governor for his plan to begin reopening some nonessential businesses, saying it's "too soon.""

"As protesters across the country plan to challenge statewide coronavirus orders, they fiercely resist a growing narrative that they are aligned with or funded by national groups, gun rights organizations or entities supporting President Donald Trump’s reelection – even as some of those groups take part in the events. The protests, focused on rolling back stay-at-home orders to slow the spread of coronavirus, snarled traffic in Michigan, blocking a hospital entrance. Thousands of cheering, flag-waving drivers cruised around Pennsylvania. Some demonstrations feature Trump campaign flags, but homemade signs – such as one in Tennessee that encouraged Americans to "fear your government," not the coronavirus – are more prevalent."

"Much like the tea party movement that sprang up a decade ago, the coronavirus protests are a cultural eddy of conservative ideologies, from gun rights advocates to religious groups. Though many organizers insist the "gridlock" events and protests are nonpartisan, many have taken on the flavor of Trump rallies – including a smattering of campaign signs and the president's trademark red "MAGA" caps."

"Ivanka Trump on Wednesday defended the rights of protesters to gather in defiance of stay-at-home measures imposed by some states to fight the coronavirus pandemic, but encouraged demonstrators to practice social distancing and wear masks. "Peaceful protest & freedom of assembly are beautiful American traditions that should always be protected," the president's oldest daughter and senior adviser tweeted."

"The size of the protests have varied from state to state. Thousands of people turned out in Lansing for last week’s protests in Michigan, but most gatherings have numbered in the hundreds. A planned demonstration in Maryland earlier this week only drew a few attendees. Photos and video from the gatherings show people packed close together with many not wearing masks. The Trump administration has recommended wearing masks to help prevent asymptomatic spread of the virus."

"Across the country, more protests have popped up in both red and blue states. And they have backing from powerful conservative allies in Washington DC, including FreedomWorks, a major conservative group closely associated with the Tea Party, and Stephen Moore, an economist who President Donald Trump tapped as a member of his economic reopening council. "Our goal is to make these protests as safe as possible and as effective as possible," Moore told CNN. "The whole idea of civil disobedience in a protest is to persuade people (that) what you're doing is speaking up for a cause, you know, that people will feel is just and right.""

"Among the guidelines for "Opening Up America Again," states shouldn't start to reopen until they have a downward trajectory of documented cases in a 14-day period or a downward trajectory of positive tests as a percent of total tests in a 14-day period...Three Southern governors, though, are ready to slowly reopen their states. The governors of Georgia, Tennessee and South Carolina said Monday they'd start the process of reopening businesses in their respective states this week or at the latest next Monday."

What the ‘Liberate’ Protests Really Mean for Republicans

"While Trump has egged on the demonstrators and urged governors to phase out stay-at-home orders, Democrats have assailed the protests as conservative-backed stunts that are endangering people’s lives. [Ohio Republican Rep.] Jordan attributes the anger to governors and mayors who have, in the minds of conservatives, gone overboard in their efforts to enforce lockdowns by threatening to break up religious services and encouraging citizens to “snitch” on businesses and neighbors. “This is ridiculous,” he said. “Americans understand that, and that’s why they’re speaking out.”"

"Like governors on the East and West Coasts, [Gov. Gretchen] Whitmer has partnered with leaders of the states near Michigan to plot a regional approach to reopening the economy. “Moving too soon or too fast could very likely lead to a second wave of Covid-19,” she warned in a New York Times op-ed this week. “This would be catastrophic for our families, our health care systems and our businesses.”"

Who’s Behind the ‘Reopen’ Protests?

"The protests playing out now have the same feel as the Tea Party protests aided by Koch-financed Americans for Prosperity and others a decade ago — and with good reason: Early evidence suggests they are not organic but a brush fire being stoked by some of the same people and money that built the Tea Party. Look no further than the first protest organized by the Michigan Conservative Coalition and the Michigan Freedom Fund — whose chairman manages the vast financial investments of Dick and Betsy DeVos, the Education Secretary — to see that the campaign to “open” America flows from the superrich and their front groups."

"America is now facing three calamities: a deadly contagion, a capricious president and a well-funded right-wing infrastructure willing to devalue human life in pursuit of its political agenda. Some very rich men and women are making this medical disaster worse through their reckless bellows, inflaming people to demand that states open now no matter how many lives that costs."

Democrat Govs. Pritzker, Whitmer Push Back at Trump Over Protests

"Democrat Govs. J.B. Pritzker and Gretchen Whitmer Tuesday pushed back at President Donald Trump over his support of protesters in their states demanding their right to return to work and to reopen businesses, claiming that he is spreading fear and putting the public at risk with his stance."

"Whitmer also denied that her comments against Trump's actions are part of an audition to become presumptive Democrat nominee Joe Biden's running mate. Instead, she said she's focusing on managing the coronavirus crisis in her state. However, her stringent rules, including bans on certain purchases or allowing Michigan taxpayers to travel to property they own in the state has led to protests at the state capital, including from people who want to return to work as the state's unemployment rates soar. More than 1 million people in her state are unemployed through closures under rules set under the governor's office or from having lost their jobs since the outbreak began."

"It feels like 2009 redux, with spontaneous anti-government protests, once again, getting smeared. Of course, the proximate cause of the protests this time is the coronavirus lockdowns rather than Obamacare, although the feel of the demonstrations — expressing populist anger at government overreach — is the same, and so is the reaction of the critics. The line of attack is the familiar one of using a few isolated idiots or kooks to tar the entire enterprise. To this end, if there’s one thing Democrats (and the media) want you to know about the anti-lockdown protest at the Michigan state capitol in Lansing last week, it’s that people were flying Confederate flags."

"Perhaps there were more, and perhaps you can find more that I missed. The point, though, is you have to go out of your way to scour the record in painstaking detail to find them amid a vast sea of American flags. It’s entirely legitimate, obviously, to disagree with the anti-lockdown protests and to think they are wrong to want to open up now. But, please, don’t depict them all as a bunch of neo-Confederates. It’s tiresome, and not true."

""Legislators and policymakers should listen to the people and heed the message of these protests. Families and workers are doing their part to flatten the curve. In doing so, they are watching their mortgages, dreams of retirement, and financial safety all slip away. After the initial shock of the coronavirus pandemic, the time has now come to develop a thoughtful and reasonable strategy to reopen the country and get our economy back on track."

"With the protests throughout the country, the people of the United States have spoken clearly and loudly that now is the time to begin that conversation. Before we sink any further into a recession and before our unemployment becomes too much to handle, we should start planning how to open our economy again."

Tags:
Story of the Week
Role of Government
coronavirus
Life during covid-19