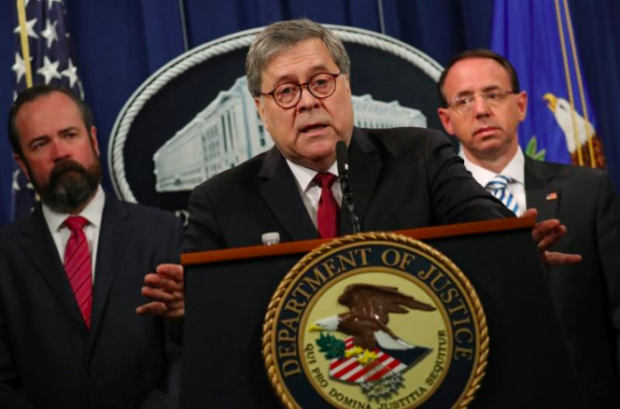 In a press conference today, Attorney General William Barr said that the Mueller report found no evidence of collusion between Russia and the Trump campaign during the 2016 presidential election, adding that there was insufficient evidence to indict President Trump on obstruction of justice.
Some accused Barr of being blinded by partisanship and argue that the report effectively implicates Trump in obstruction, as it alleges that he asked aides to interfere in Mueller's inquiry. Others say that the president was vindicated, with some pundits painting Trump's detractors as politically motivated conspiracists.
Check out some other big stories this week: Notre Dame Burns as the World Watches, The 2020 Presidential Campaign Money Race, and A Tax Day Look At Trump's Tax Cuts.
Can liberals and conservatives agree on anything? Yes. Find out more by watching this video with AllSides CEO John Gable and Living Room Conversations founder Joan Blades at the Wisdom 2.0 Conference.
We're hiring! AllSides is looking for a data journalist and analytics guru. Learn more and apply here.

"Moscow extensively interfered in the 2016 presidential election, but repeated communications with the Trump campaign that year didn’t amount to a criminal conspiracy, Robert Mueller said in a report that also avoided judgment on whether President Trump obstructed justice out of 'fairness concerns.'"

"Robert Mueller’s voluminous examination of Russian election interference portrays a Trump campaign and White House whose operations came dangerously close to breaking the law. The special counsel's report released Thursday is all but certain to shadow President Donald Trump as he seeks re-election."

"Mueller built an extensive case indicating the Republican president had committed obstruction of justice but stopped short of concluding he had committed a crime, though he did not exonerate the president. Mueller noted that Congress has the power to address whether Trump violated the law."

"The long-awaited report from special counsel Robert S. Mueller III details abundant evidence against President Trump, finding 10 episodes of potential obstruction but ultimately concluding it was not Mueller’s role to determine whether the commander in chief broke the law."

"Barr auditioned for his job by broadcasting his hostility to Mueller's investigation and his loyalty to Trump. Now that he is the nation's top law enforcement officer, Barr has shown himself to be as advertised. In his handling of Mueller's report, Barr has done a disservice to the Department of Justice and the American people -- but he has done a potentially administration-saving favor for Trump."

"The report makes clear that the president’s obstruction of the F.B.I. and special counsel investigations crossed constitutional boundaries that could have merited criminal prosecution, if not for the Justice Department’s policy against indicting sitting presidents. Mr. Mueller’s report notes that his office explicitly considered absolving the president of obstruction of justice, but emphatically chose not to."

"After two years of investigation and thousands of subpoenas and witness interviews, Special Counsel Robert Mueller confirmed that that the Russian government sponsored efforts to interfere with the 2016 presidential election, but didn't find that the Trump campaign or the American people colluded with them, Attorney General William Barr said Thursday."

With full Mueller report out, time to go after the real conspirators
Fox News Opinion

"All there was, as we can now clearly see, was a rational reaction by a president who realized just how much of a mess his FBI Director and Deputy Director had made of the Clinton email investigation and saw the same people wasting taxpayer money on a politically-motivated investigation into something he knew all along was a baseless conspiracy theory.”

"Although it looks as though Trump wasn’t trying to cover up any collusion and never crossed the line into criminal obstruction, he did try to undermine an investigation and repeatedly pushed others to lie or deflect in order to defend himself. This reflects his disregard for the federal law enforcement apparatus of which he is the constitutionally designated head."