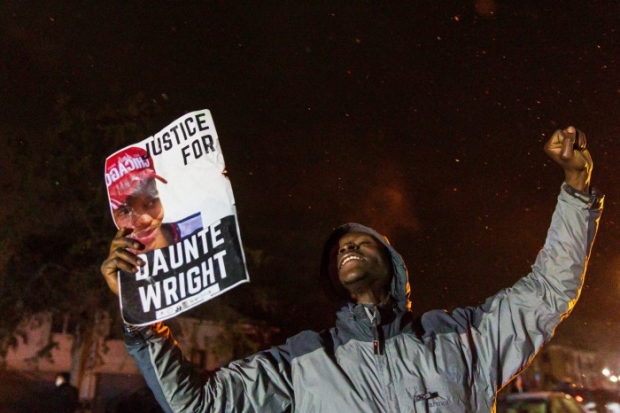 As the trial of George Floyd's alleged killer continues in Minneapolis, demonstrations and unrest broke out just miles away in Brooklyn Center, Minnesota after another black man, 20-year-old Daunte Wright, was fatally shot by a police officer on Sunday. Police said they stopped Wright for a traffic violation and attempted to arrest him after discovering that he had an outstanding arrest warrant for failing to appear for a court hearing. Wright then reentered his vehicle and an officer shot him, after which Wright drove several blocks before hitting another vehicle.

Kim Potter, the officer who shot Wright, was charged with second-degree manslaughter on Wednesday. Police said that Potter, who resigned from her position along with Brooklyn Center Police Chief Tim Gannon, intended to use her Taser on Wright but accidentally drew her handgun instead. Body cam footage of the incident showed Potter shouting "Taser! Taser! Taser!" and then "Holy s***, I just shot him!" afterwards.

Outlets from across the spectrum published coverage of each development in the story, including broader coverage of how often police officers mistake guns for Tasers (18 times in the last 20 years). Coverage in some right-rated outlets focused on cases of looting and violence in the unrest following Wright's death, as well as on Wright's December 2019 charge of first-degree aggravated robbery. Coverage in some left-rated outlets focused on the idea that police shootings like this one effectively criminalize "driving while black."

Perspectives: When both sides rely on fear mongering, they make hyperbolic and unfounded charges, but can't provide much evidence. Still, neither really needs to--they are successfully rallying their troops against a pair of non-existent enemies; It's common to attribute our political opponents’ beliefs to irrationality. But experts say blaming polarization on the irrationality of the other side is unreasonable. Why do both Democrats and Republicans show irrationality?

More from AllSides: When was the last time you talked about politics with someone on the other side? AllSides Talks™ brings people together for a day of political dialogue on Earth Day on Thursday, April 22, 2021, at 5 pm PST / 8 pm ET. Join us for respectful conversations across political divides; Sick of "fact checks" that aren't really just checking the facts? Use our Facts and Fact Checking portal to compare facts, fact-checking and analysis from across the spectrum; Download the AllSides mobile app for balanced news on the go. Available for iOS and Android; and you can support our work and mission by becoming a sustaining member of AllSides. Sustaining memberships allow you to read AllSides ad-free.

"Outraged and spiritually exhausted residents of Brooklyn Center on the outskirts of Minneapolis have condemned what they described as a long track record of racial targeting by police in the small city. Two days after a white officer shot dead Daunte Wright, a 20-year-old Black man, during a traffic stop on Sunday, protests continued and people left flowers at the side of the road, in a growing makeshift memorial where he was killed...“This is nothing new. It’s been ongoing. It’s always like this,” Stacy Osagiede, 24, said when asked if she thought Wright had been profiled by race when pulled over. Brooklyn Center is less than 15 miles from the spot where George Floyd was killed last May in south Minneapolis."

Why should a cop's blue fear matter more than my Black life?

"I'm a Black man who has never personally had a nasty run-in with the police. I should have no trouble with them. But I fear them, and I know they fear me...While I understand a cop's fear, it's not the same as wondering if your kid might be killed after a cop decides to pull him over or because he was selling loose cigarettes on a street corner. Random violence is the scariest crime because there's nothing you can do to avoid it, because you can't anticipate it. We understand that when a young man shoots up a school or mall or movie theater. That's what police violence has done to me. It's why even though I've never been harmed by police, I can't help but wonder if that's gonna change by tomorrow."

Are These Rumors About Daunte Wright’s Criminal Record True?

"The claim: When Brooklyn Center police fatally shot Daunte Wright on April 11, 2021, he was "on the run" from law enforcement for committing aggravated robbery.
What's true: Wright was charged with aggravated robbery for an incident that occurred in December 2019, court documents showed. Additionally, there was a warrant for Wright's arrest when Brooklyn Police said they pulled him over for expired license plate tabs on April 11, 2021, and one officer fatally shot him. However...
What's false: A judge issued that warrant for Wright's arrest weeks before his fatal encounter with police because he missed a court hearing for unrelated misdemeanor charges, not aggravated robbery."

"President Joe Biden called for "peace and calm" on Monday following an evening of protests after a police officer in a Minneapolis suburb shot and killed a 20-year-old Black man during a traffic stop. Biden called the shooting death of Daunte Wright on Sunday "a really tragic thing" and said he watched "fairly graphic" body camera footage from the officer who fired the fatal shot."

"Only a handful of deaths in the US have resulted from a police officer mistakenly drawing a pistol instead of a Taser, as the Minnesota cop who shot Daunte Wright did — and most of the cases did not result in criminal charges against the officers. Kimberly Potter, 48, a 26-year veteran, fatally shot Wright during a Sunday traffic stop when she made the tragic error, Brooklyn Center Police Chief Tim Gannon told reporters Monday. “Holy s–t,” she is heard saying on chilling bodycam video. “I just shot him!”"