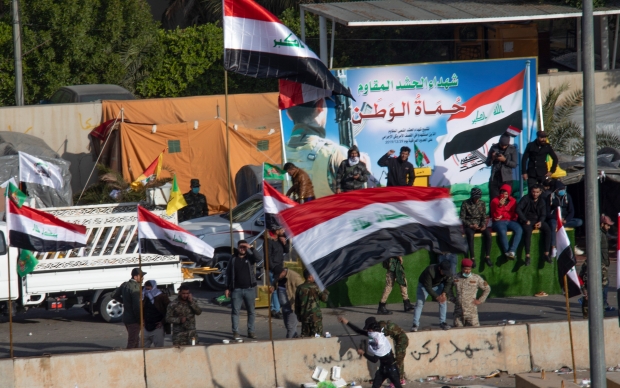 Iran-backed Iraqi militias mounted two days of protests at the United States Embassy in Baghdad, destroying property and trapping diplomats inside, before dispersing Wednesday night as the U.S. began deploying additional military forces to the region.

The protests were in response to U.S. airstrikes over the weekend which reportedly killed at least 25 Kata'ib Hezbollah fighters, an Iranian-backed militant group blamed for rocket strikes which killed an American contractor at an Iraqi military base last Friday.

Certain reporting elements differed from left to right; many center and right-leaning reports described the perpetrators as "militias," while left-leaning reports tended to call them "protesters" or "demonstrators." Many right-leaning voices drew comparisons to the 2012 Islamist attacks on U.S. outposts in Benghazi, Libya which resulted in the deaths of four Americans, including Ambassador to Libya J. Christopher Stevens.

How does media bias work?: Start 2020 by honing your news literacy skills and knack for seeing bias in media coverage with the AllSides guide on 11 types of media bias and how to spot them .

US troops deployed to Middle East after Baghdad siege

"The US defence secretary, Mark Esper, announced that 750 airborne troops would be deployed to the region immediately, with more to follow in the next few days. Up to 3,000 soldiers are reportedly being prepared to move out to the Middle East, adding to the 14,000 sent there since May in an effort to counter Iran."

"The breach of the embassy compound came in response to US airstrikes on Sunday that killed 25 Kata’ib Hezbollah fighters. The US said the strikes were in retaliation for last week’s killing of an American contractor, and the wounding of several US soldiers, in a rocket attack on an Iraqi military base, the latest of a string of attacks which the US blamed on the militia."

"In an orchestrated assault, hundreds of militiamen and their supporters broke into the embassy compound, destroying a reception area, smashing windows and spraying graffiti on walls to protest U.S. airstrikes against an Iran-backed militia over the weekend that killed 25 fighters. The U.S. blamed the militia for a rocket attack on an Iraqi military base in the northern city of Kirkuk last week that killed a U.S. contractor."

"The violence came as Iran and its allies across the region have faced unprecedented mass protests in recent months and heavy U.S. sanctions have cratered Iran's economy. Iraq has been gripped by anti-government protests since October fueled by anger at widespread corruption and economic mismanagement, as well as Iran's heavy influence over the country's affairs."

Attack on U.S. Embassy in Iraq shows Trump is failing. He walked into Iran's trap.

"Most would agree that the United States had to respond in some way to the death of an American, but whether the airstrike was the right and proportionate measure is debatable. Regardless, if the Trump administration really understood the dynamics of Iraq, it might have anticipated a move like the attack on the Embassy. Administration officials might have worked more closely with the Iraq government to think through the best way forward. Instead, in essence, Trump walked into Iran’s trap. For many Americans, the Baghdad militia chants of "Death to America" echoed the takeover of the American embassy in Tehran in 1979, raising the specter of another hostage crisis."

"The violent protests, which included smashed windows and sprayed graffiti on the embassy's walls, were said to be in protest of the deadly U.S. airstrikes that targeted an Iran-backed militia over the weekend, killing 25 fighters. In turn, those strikes had been in response to a rocket attack on an Iraqi Army base that killed a U.S. contractor and injured several American troops."

"Some 100 U.S. Marines arrived at the embassy late Tuesday to bolster security as President Trump has denounced the actions by protesters, vowing the situation in Baghdad “will not be a Benghazi.” On Sept. 11, 2012, the American diplomatic compound in Benghazi, Libya, was attacked by members of an Islamic militant group. Four Americans were killed in the attack, which lasted two days. U.S. Ambassador to Libya Chris Stevens was among those killed."

"The New York Times caught flack after the publication labeled Iranian-controlled militias, which attacked the U.S. Embassy in Baghdad, as "mourners." "Hundreds of Iraqi mourners tried to storm the United States Embassy in Baghdad, shouting 'Down, down USA!,' in response to deadly American airstrikes this week that killed 25 fighters," the paper said in a Tuesday tweet."

"The demonstration came in response to airstrikes by the United States against Iranian-backed militias, which were stationed in Iraq. The U.S. has sent in Marines to help reinforce the compound. Iraqi Prime Minister Abdul Mahdi called the airstrikes an "outrageous attack." Mahdi called for a three-day mourning period following the strikes."

Baghdad attack brings back memories of Benghazi for survivor

"The attack on the U.S. embassy in Baghdad on Tuesday brought back the nightmare of Benghazi for a contractor who survived a terrorist militia’s onslught in Libya seven years ago. John “Tig” Tiegan, a contractor who fought the terrorists who stormed the Benghazi embassy on Sept. 11, 2012, said he watched Tuesday’s embassy attack in Baghdad unfold over the internet with frustration. “At least this administration is smart enough to get all the nonessential personnel out before the protest even happened,” Tiegan told the Herald."

"The attack followed U.S. airstrikes on Sunday that killed 25 fighters of the Iran-backed militia in Iraq, the Kataeb Hezbollah. President Trump blamed Iran for the embassy breach and called on Iraq to protect the American diplomats."

"Iran-backed militiamen withdrew from the U.S. Embassy compound in Baghdad on Wednesday after two days of clashes with American security forces, but U.S.-Iran tensions remain high and could spill over into further violence. The attack and its volatile aftermath prompted the Pentagon to send hundreds of additional troops to the Middle East an d U.S. Secretary of State Mike Pompeo to delay a European and Central Asian trip."

"The Popular Mobilization Forces, an umbrella group of state-allied militias — many backed by Iran — called on its supporters to withdraw in response to an appeal by the Iraqi government, saying “your message has been received.”"

Why the U.S. Embassy in Iraq became a target of anger again

"U.S. officials have said that for months Iraqi militias — backed by Iran — have been firing rockets at Iraqi military bases where some U.S. troops and American contractors are also stationed. Last Friday, a rocket attack killed a U.S. contractor in northern Iraq. The U.S. responded with airstrikes on five compounds in Syria and Iraq belonging to a group it blames for the rocket attack, the Iranian-backed militia called Kataib Hezbollah, meaning Hezbollah Brigades. The militia says at least 25 of its fighters died."

"President Trump has engaged little with Iraqi leaders, compared with his predecessors, George W. Bush and Barack Obama. He did not meet with the Iraqi prime minister when he went to see U.S. troops in 2018 — a snub noticed by Iraqis. In November, Vice President Pence did the same."

"Iraq has been roiled by anti-government protests over the last few months, fueled in part by opposition to Iranian influence in the country. There have also been broader concerns about all foreign influence, including from the United States, but Tuesday’s demonstrators were from different factions than the earlier protests."

"Trump spoke with Iraqi Prime Minister Adil Abd al-Mahdi on Tuesday and "emphasized the need to protect United States personnel and facilities in Iraq," according to the White House. Pompeo also spoke with al-Mahdi and Iraqi President Barham Salih separately by phone after the embassy was breached, making clear to them the United States would “protect and defend its people.”"