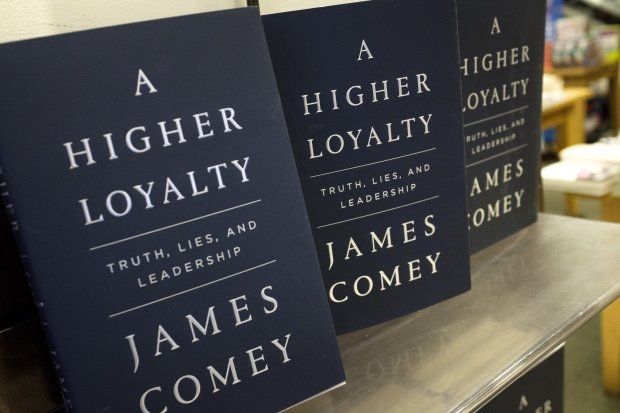 James Comey released his new book, A Higher Loyalty, about his time in the Trump White House, evoking strong reactions from the media. Ironically, Comey was condemned across the aisle, with left-leaning and right-leaning publications asserting that some of his criticisms directed towards Trump stoop to a juvenile level. Both sides also took issue with his handling of the Clinton investigation: the Right felt he botched the email probe, while the Left blamed him for Clinton's loss.
Starting tomorrow, join us for the National Week of Conversation, a week-long event from April 20-28 where Americans with differing viewpoints have conversations that prioritize listening first to understand those we tend to think of as “the other.” Attend a conversation in person or sign up for an online Mismatch conversation where AllSides sets up a structured video conversation between you and your “mismatch”.
Take a look at some other big stories this week: U.S., U.K. and France Strike Syria, Sean Hannity Revealed as Michael Cohen's Client, and Remembering Barbara Bush.
Snippets from the Right
A Higher Sanctimony
Wall Street Journal Editorial Board
"Now comes Mr. Comey’s memoir, 'A Higher Loyalty,' which is an attempt at revenge and vindication. With the help of special counsel Robert Mueller, Mr. Comey may succeed at the former. He fails utterly at the latter. The main lesson from Mr. Comey’s book is that Mr. Trump’s abuse of political norms has driven his enemies to violate norms themselves.
...
Mr. Comey reveals in his excessive self-regard that he is more like Mr. Trump than he cares to admit. Mr. Trump’s narcissism is crude and focused on his personal 'winning.' Mr. Comey’s is about vindicating his own higher morality and righteous belief.
That comes through most clearly in his defense of his handling of Hillary Clinton’s emails. Mr. Comey says he was put in an impossible situation: 'I knew this was going to suck for me.' Yet he says he had to pre-empt his superiors at Justice in July 2016 to absolve Mrs. Clinton because only he could assure Americans that the probe was fair. He endorses following the chain of command, but then says he had to ignore it for the greater good."
Snippets from the Left
James Comey's revenge tour proving he is not the noble upholder of justice he wants you to believe
Daily Kos
"Here's the thing: the Clinton investigation wasn't an ordinary investigation, and that's precisely why Comey should have shut up about. He's admitting that his July 2016 decision to publicly criticize Clinton was against FBI protocol. There's policy in place to prevent FBI directors from doing things like making public statements or taking action that could directly affect an election, because the FBI director could have undue influence. Comey apparently felt that those rules didn't apply to him.
...
Comey doesn't seem to have any problem with the fact that he overrode FBI policy—that he considered himself above it—when it came to damaging the reputation of the woman he believed was going to become president, and jumping the gun to do so. It was for her own good, he would have you believe, so she wouldn't be perceived as an 'illegitimate president.'
...
His hubris, on full display as he preens and gossips and makes catty remarks about Trump's spray tan and hand size, quite possibly put this man he considers a dangerous buffoon in office. And even now, Comey says he wouldn't have it any other way. There's nothing at all noble in any of that."
Snippets from the Center
Fired FBI director Comey says Trump 'morally unfit': ABC News interview
Reuters
"Former FBI director James Comey said in an ABC News interview on Sunday that U.S. President Donald Trump is a dangerous, 'morally unfit”'leader doing “tremendous damage” to institutional and cultural norms.
...
'A person ... who talks about and treats women like they’re pieces of meat, who lies constantly about matters big and small and insists the American people believe it, that person’s not fit to be president of the United States, on moral grounds. And that’s not a policy statement,' Comey said.
...
Comey also defended his decision to publicly disclose the FBI’s re-opening of its investigation into Democratic presidential candidate Hillary Clinton’s handling of email when she was secretary of state.
The Clinton probe was already public, Comey said, whereas the FBI’s examination of possible collusion between the Trump campaign and Russia
Discover more on this topic on AllSides.
Politics, James Comey, Donald Trump, FBI, Story Of The Week, News