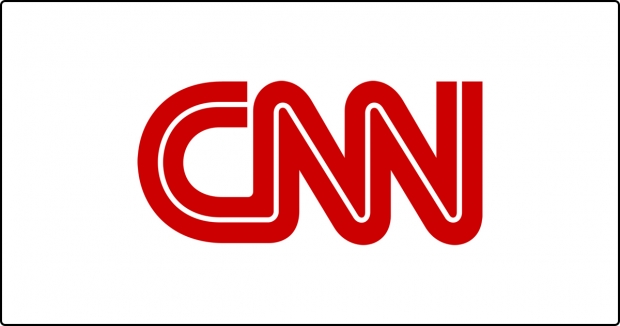 Even in this time of crisis and death, some in the news media launched partisan attacks on Republican governors regardless of actual data, including how many people have died.

We see this in the media all the time: journalists often cherry-pick commentary and data to support the side they like and attack the other. This is a criticism that is frequently made against the left, such as writers for the New York Times and commentators on MSNBC, and against the right, such as Fox cable news opinion show hosts Sean Hannity and Tucker Carlson or conservative columnists like Ben Shapiro. Here we see an example on the left.

Last week, CNN's "The Point with Chris Cillizza" published an article, “The next 5 governors to watch on coronavirus.” In it, Cillizza discussed seven governors and strongly criticized the only two Republican governors mentioned.

But Cillizza skipped over the fact that the states he criticized that are run by Republican governors had lower death rates than states run by Democratic governors.

Cillizza complimented Kentucky Gov. Steve Beshear, a Democrat, for being on the “leading edge,” while drawing a comparison to the Republican Governor of Tennessee, Bill Lee, noting Lee had been criticized for his “far slower response.” Cillizza then quoted raw numbers, noting that Tennessee has more coronavirus cases — but ignored the fact that Tennessee has over 2 million more people and its death rate is less than half of Kentucky’s.

Cillizza’s criticism of Florida Gov. Ron DeSantis, another Republican, was more severe and more contrary to comparative data. Noting that DeSantis has “received poor reviews” and has “resisted” the “calls from Democratic lawmakers” to implement stricter measures, Cillizza noted Florida had 21 deaths. He did not note that at the time of publishing, Florida had just under one death per million people. Two of the other Gulf Coast states, Texas and Mississippi, also had under one death per million, and are both led by Republican governors.

Louisiana had a dramatically higher rate of nearly 10 deaths per million people. Cillizza did mention the problems there by stating, “more people have died of coronavirus in Louisiana than California,” but was sure to include a more positive quote from their Democratic governor, John Bel Edwards, who said, “I'm fighting to save our people.”

Here’s an analysis of CNN bias in this article: 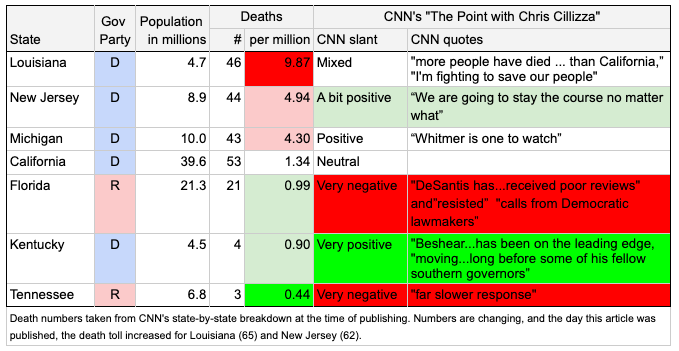 The situation can vary greatly from state to state, and it is too early to tell what the final outcome will be, so any comparison of leadership at this point might be unfair. But it is quite clear in this case that the reporter made conclusions in direct opposition to the raw data available today. Whether intentional or not, this is a clear case of slant and bias by omission.

This misleading commentary from one of the nation’s most influential news organizations is very unfortunate to see during our national time of crisis.

John Gable is the co-founder and President of AllSides. He has a Lean Right bias.