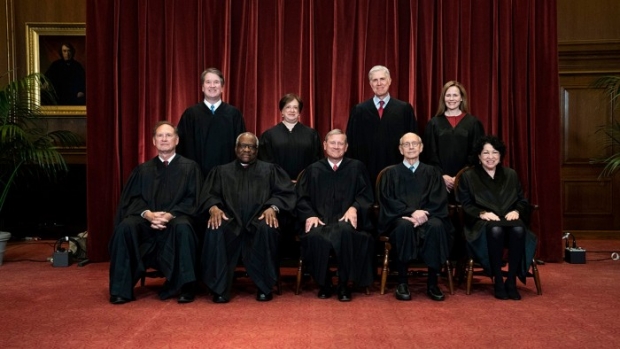 The Supreme Court issued the last decisions of its term Thursday morning, capping off a session that featured several key rulings. Among them: it voted 6-3 to uphold Arizona voting laws in a win for the GOP; it sided 8-1 with a high school student in a free speech case against her school; and it declined to hear a case regarding a school board's policy on transgender students and bathroom use, leaving in place a lower court’s ruling that the school unconstitutionally discriminated against a transgender male who was denied access to the boy’s bathroom. The court's next term begins in October.

The court's various decisions made headlines throughout political media, especially the ones concerning voting rights, LGBTQ rights and free speech. Voices on both left and right also acknowledged the fact that many of the court's recent decisions were unanimous or mostly unanimous; some took that as a sign that partisan tensions among the U.S. public are exaggerated. Many outlets across the spectrum also speculated about the possible retirement of 82-year-old liberal Justice Stephen Breyer and what that could mean for the court's future; some on the left are hoping he retires so the current Democrat-controlled legislature can soon appoint another liberal justice.

"The brief court order noted that conservative Justices Clarence Thomas and Samuel Alito would have taken up the case. President Joe Biden's administration, reversing the position taken by the government under his predecessor Donald Trump, said on June 16 that Title IX protects both gender identity and sexual orientation. The administration has not said specifically how that applies to school bathroom access."

"In a 5–4 decision, the court rejected a plea by landlords to end the ban on evictions that was put in place amid the CCP (Chinese Communist Party) virus pandemic as some tenants have struggled to pay rent. The ruling means that the moratorium will remain in place until July 31...Chief Justice John Roberts and Justice Brett Kavanaugh joined with the court’s three Democrat-appointed justices to keep the moratorium in place, while Justices Samuel Alito, Amy Coney Barrett, Neil Gorsuch, and Clarence Thomas voted against the extension."

"The question of whether the government could hold the immigrants without a hearing before an immigration judge had divided courts around the country. The case was argued before President Biden took office, and lawyers for the Trump administration told the court immigrants were not entitled to a hearing. Alito said Congress had good reason to be more restrictive with those who came back into the country after being deported"

"The 6-3 ruling Thursday, which was split between the conservative and liberal justices, said Arizona did not violate the Voting Rights Act when it passed a law in 2016 allowing only voters, their family members or their caregivers to collect and deliver a completed ballot. The court also upheld a longstanding state policy requiring election officials to throw out ballots accidentally cast in the wrong precincts."

"Progressive activists are hoping that Breyer, who will turn 83 in August, will announce he is retiring Thursday, the same day the Supreme Court delivers its final two opinions of the term. But a justice can decide to retire at any time — though both Anthony Kennedy and Sandra Day O'Connor announced their respective retirements at the end of the court's session."

"In a 6-3 ruling authored by Chief Justice John Roberts, the court said California had subjected donors to the threat of public harassment and intimidation, undermining their First Amendment right to free association...California requires nonprofit organizations to give the state a list of their biggest donors each year. The state is supposed to keep that information private, but has routinely failed to do so."