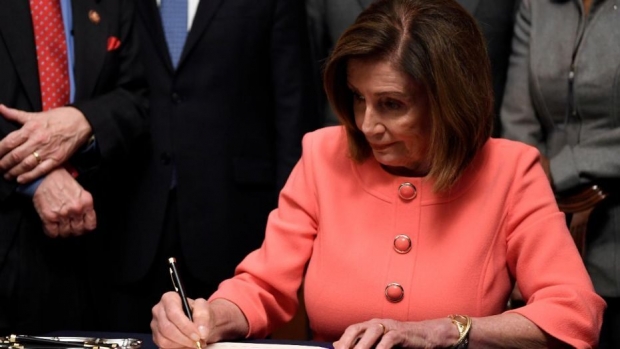 A team of House representatives chosen as "impeachment managers" present the articles against President Donald Trump to the Senate Thursday afternoon, setting in motion the third presidential impeachment trial in U.S. history.

Opening arguments begin next Tuesday, when 100 Senators become jurors and prepare to hear each side make its case. A Senate decision on dismissing the articles or continuing proceedings by calling witnesses is expected several weeks into the trial.

Many left-leaning outlets focused on recently released documents and statements from Rudy Giuliani associate Lev Parnas, which support claims that the president lied abut his knowledge of Giuliani's Ukraine dealings. Right-leaning outlets focused more on purported hyper-partisanship on the part of Congressional Democrats in crafting the impeachment process.

Check out some other big stories this week: US, China Sign 'Phase One' Trade Deal; Iran Acknowledges 'Unintentionally' Shooting Down Ukrainian Jet; and Booker Drops Out.

"To critics, the tone of the event seemed celebratory -- a far cry from December, when Pelosi wore black and insisted on the House floor it was a “solemn” day before the Democrat-controlled body voted to impeach the president on abuse of power and obstruction of Congress allegations. Later, she even cut short two rounds of cheers from Democrats when the articles were adopted."

"Trump maintains the House impeachment effort -- based on accusations that he pressured Ukraine to launch an investigation into his political rival, former Vice President Joe Biden, and his son, Hunter, in exchange for U.S. military aid -- is a “hoax” and claims he is a victim of a political “witch hunt” led by Pelosi. He is the third president in U.S. history to be impeached."

The impeachment trap: Endangered Senate Republicans face peril whether they support Trump or not

"Senate Republicans vulnerable to a Democratic challenge this year are facing a kind of political Catch-22 as the impeachment trial looms: Voting against President Trump risks the wrath of GOP primary voters, but voting for him ensures renomination but could cost them their careers in November. Sens. Susan Collins of Maine, Cory Gardner of Colorado, and Martha McSally of Arizona are under the most pressure, and not just on whether to acquit or convict Trump on charges of abuse of power and obstruction of Congress. The Senate will vote on whether to call witnesses at trial, another political minefield."

"Republicans in their states are fiercely loyal to Trump and would not brook dissent. It could be the exact opposite with the broader electorate. Democrats swept Maine in 2018, leaving Collins as the only Republican elected to major office. Colorado is practically a blue state at this point, and Arizona, dominated by suburban voters, is drifting from the GOP orbit."

"House Democrats have finally vouchsafed to deliver their impeachment articles to the Senate, a month after they claimed their rushed votes were essential to save the republic. The Senate can now do better by the Constitution by holding a trial that judges President Trump without validating the partisan House process and its weak case."

"The Senate may not even need to hear from the President’s defense team. Let the House managers make their case. If a majority of Senators believe the evidence is as inadequate as we do, then repudiate this impeachment with votes to acquit on both articles."

Senators to be sworn in for Trump impeachment trial

"The Senate on Thursday will take some of its first steps to prepare for next week's impeachment trial of President Trump, just the third such trial in Senate history. Like many congressional activities, the process begins with much pomp and circumstance and procedure and process. But little of substance will be achieved until the case for impeachment is presented next week."

"Perhaps most difficult of all, senators will be separated from their cellphones while in the chamber and must check them in their cloakrooms."

GOP Senator: 2020 candidates must recuse themselves from impeachment trial

"Sen. Marsha Blackburn (R-Tenn.) said on Wednesday that Democratic senators running for the party's 2020 nomination should recuse themselves from taking part in President Trump's impeachment trial."

"Senators are expected to be sworn in by Chief Justice John Roberts on Thursday afternoon; no one is expected to recuse themselves from the trial. The call for the presidential contenders to recuse themselves from the trial comes after some Democrats have called on Senate Majority Leader Mitch McConnell (R-Ky.) to do the same after he pledged to be in "total coordination" with the White House and that he would not be an "impartial juror.""

"A close associate of President Donald Trump’s personal lawyer Rudy Giuliani is claiming Trump was directly involved in the effort to pressure Ukraine to investigate Democratic rival Joe Biden. Lev Parnas says he delivered an ultimatum in May, at Giuliani’s behest, to the incoming president of Ukraine that no senior U.S. officials would attend his inauguration and vital American security aid would be withheld if an investigation into Biden wasn’t announced."

How a Senate impeachment trial works

"After the House voted on sending the articles of impeachment to the Senate, the team of House prosecutors known as impeachment managers walked the charges across the Capitol to the Senate. The managers will present articles of impeachment — literally by reading them — to a full Senate on Thursday at 12. By Thursday afternoon, Chief Justice John G. Roberts Jr. will arrive and be sworn in as presider by Senate President Pro Tempore Charles E. Grassley (R-Iowa). Then Roberts will swear in the 100 senators who will serve as jurors."

"To close out the trial, there are a couple of procedural motions and closing speeches. One fun one during the Clinton trial: Senators presented then-Chief Justice William Rehnquist with a golden gavel award, a tradition in the Senate going to anyone who presides over the Senate for 100 hours. Rehnquist got a standing ovation. During the Clinton trial, the Republican and Democratic leaders both spoke to thank the other for his cooperation, and they got a standing ovation."

"The previously undisclosed documents, released late Tuesday night but not publicly noticed, were posted ahead of the House formally sending its impeachment articles to the Senate, underscore the evolving nature of an investigation that House Democrats say is ongoing — and was stifled in its early stages by Trump’s refusal to allow his aides and associates to comply with congressional subpoenas."

"Lev Parnas, a key associate to Rudy Giuliani, a lawyer working for President Donald Trump who ran the Ukrainian backchannel campaign at the center of his impeachment, told MSNBC on Wednesday that "President Trump knew exactly what was going on.""

"The interview aired after House Democrats released hundreds of pages of new documents related to the impeachment inquiry into President Trump, including texts and notes turned over by Parnas. Three House committees sent the evidence to the House Judiciary Committee on Tuesday “to be included as part of the official record that will be transmitted to the Senate along with the Articles of Impeachment.” The House sent the articles to the Senate on Wednesday evening."