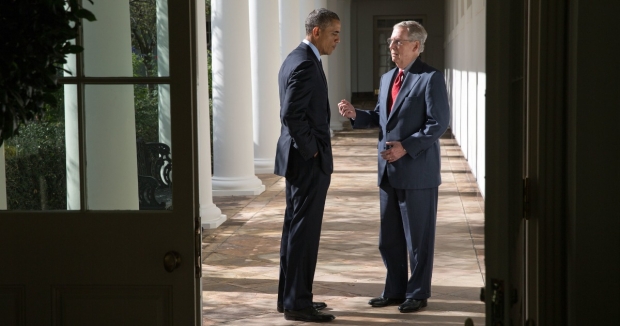 Imagine that the economy has imploded and you have just been let go from your job. After months of tirelessly searching for a new job, your savings have been depleted and you are forced to foreclose on your home. As you sit, stressfully contemplating your plans for the future, what are your priorities going to be?

Will you be concerned with America’s foreign policy agenda (Should the number of troops in Afghanistan be increased or decreased?), or will you be pondering a way to pay your bills, a way to feed yourself, and a way to find a steady job? My guess is that you’ll focus on the latter.

As this thought experiment demonstrates, we all share a bedrock of common needs. Regardless of whether the individual in our hypothetical situation (inspired by the Great Recession) was a Democrat or Republican, they would still likely focus on finding a means to pay their bills.

Maslow’s Hierarchy of Needs, a psychological theory formulated by the famed psychologist Abraham Malsow, can be the lens through which we view this bedrock of shared needs.

The next rung of the Hierarchy of Needs comprises safety needs, which include the need for personal security, employment, resources, health, and property. Again, regardless of political affiliation, everyone must address these needs after their physiological needs are met.

A Pew Research study, published in April 2020, revealed the policy implications of these shared physiological and safety needs. According to the study, many federal agencies are supported by majorities of Democrats and Republicans. And many of these federal agencies that garner bipartisan support are tasked with implementing policies that fulfill physiological and safety needs.

Furthermore, the Department of Homeland Security (DHS) also received favorable opinions from majorities of Democrats and Republicans. Because the DHS’ mission of “...striving to prevent future attacks against the United States and our allies, responding decisively to natural and man-made disasters, and advancing American prosperity and economic security long into the future” represents another government effort to address the safety and physiological needs of the American people, bipartisan support for the DHS can also be attributed to the universality of Maslow’s Hierarchy of Needs, further cementing the importance of acknowledging our common needs if we are to build upon common ground. (It’s worth noting that these surveys were conducted at the pandemic’s outset, and that partisan politics could have polarized public opinion of the CDC and HHS further since then.)

The next rungs on Maslow’s Hierarchy of Needs, love and belonging, esteem, and self-actualization, appear less connected to matters of policy than safety and physiological needs are.

However, that isn't to say that there aren’t bipartisan policies that can encourage love and belonging, esteem, or self-actualization. For instance, the legalization of same-sex marriage, which is a policy supported by the majority of Democrats, Democratic leaners, and Republican leaners, and by a sizable minority of Republicans, would enable all Americans to marry who they love, meeting their need for love and belonging.

Other policies, such as increasing the number of psychologists in schools, a policy proposed by Democratic and Republican officials, or passing anti-cyberbullying legislation, which have been enacted by the majority of state legislatures, could potentially help individuals meet their need for esteem.

All in all, while their political ideologies may differ, Democrats and Republicans still possess the same basic human needs. And these shared needs can serve as an abundant source of common ground.

Jackson Lanzer is a high school senior and a young professional member of the Los Angeles World Affairs Council. He will begin his undergraduate education next fall, pursuing a degree in International Affairs from the Elliott School of International Affairs at George Washington University. He has contributed to the Contested Politics Blog and the Bridge Alliance Blog, and he currently writes depolarizing articles for United News Roundup. Additionally, his writing has been referenced in USA Today, and he has won several regional Scholastic Writing Awards for critical essay writing and journalism. Jackson has a Center bias.

This piece was edited by AllSides.com Managing Editor Henry A. Brechter (Center bias), and was reviewed by James Coan (Center bias). Correspondence can be directed to james@allsides.com.