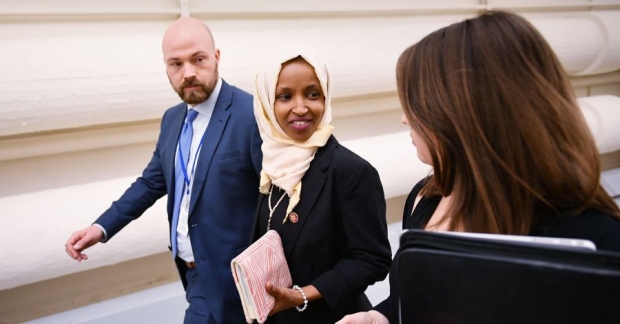 The House voted to condemn "anti-Semitism, Islamophobia, racism and other forms of bigotry" after Rep. Ilhan Omar (D-MN) made several comments on Twitter that were accused of being anti-Semitic.
Some said her remarks, in which she claimed that American support for Israel is "all about the Benjamins" and that it involves "allegiance" to a foreign country, were within the realm of acceptable rhetoric, just as lawmakers often criticize lobbying efforts from outside groups. Others say that her comments were deeply offensive and fed into historical anti-Semitic tropes.
From the Blog: Researchers quoted by the BBC claim that we don't really live in online echo chambers—or filter bubbles. Not so fast.
Check out some other big stories this week: Trade Deficit Hits Record High: Good News or Bad News?, Migrant Border Crossings Hit 76,000 in February, and Senate Prepares For Showdown On National Emergency Declaration.
Snippets from the Center
House Overwhelmingly Backs Resolution Opposing Hate
Wall Street Journal
"The House on Thursday overwhelmingly approved a broad resolution condemning hate in all forms, a response both to a freshman Democrat’s remarks that were seen as anti-Semitic and to the attacks the Muslim lawmaker has faced since arriving in Congress."
House passes anti-hate measure amid Dem tensions
The Hill
"While critics argued Omar should have been directly named in the resolution, a number of progressives and members of key minority caucuses stood by her this week, balking at the suggestion she be singled out and calling for the language to be broadened to include the condemnation of other forms of bigotry."
Debate over anti-Semitism charges exposes divide in Democratic Party
Reuters
"Representative Liz Cheney, the No. 3 House Republican, told reporters on Wednesday that Omar 'embodies a vile, hate-filled, anti-Semitic, anti-Israel bigotry.'"
Snippets from the Right
Anti-Semitism within America's gates
Washington Times Opinion
"First off, supporting a nation financially and politically is not the same as rendering allegiance. Second off? As Democrat Rep. Nita Lowey tweeted: 'Throughout history, Jews have been accused of dual loyalty, leading to discrimination and violence, which is why these accusations are so hurtful.'"
Rahm Emanuel: Yup, Ilhan Omar Is Definitely Anti-Semitic
Townhall
"Emanuel's position is far different than other Democrats who say Omar's comments weren't anti-Semitic but rather a criticism of Israel. The Chicago Mayor was blunt about his position, saying, 'Her remarks are not anti-Israel; they are anti-Semitic.'"
Ilhan Omar Shows How Intersectionality Can Elevate Bigotry
National Review
"Identity cannot be a substitute for or a supplement to reason and morality. Anti-Semitic voices are no more valuable coming from a refugee than from a redneck. If Democrats cannot recognize that fundamental fact, then intersectionality will have encroached on decency, and bigotry will have made yet another cultural advance."
Snippets from the Left
Democrats’ criticism of Ilhan Omar suggests little room for diversity on Israel
Washington Post Opinion
"That double standard is reflected in the treatment of Omar, one of the first Muslim women elected to Congress. She has been the target of Islamophobic attacks since arriving on Capitol Hill. A poster connecting her to the 9/11 terrorist attacks led to the resignation of at least one staff member and left another injured after a physical altercation spilled into the chamber of the West Virginia House of Delegates."
Why, as members of Congress, we must call out Rep. Ilhan Omar's comments
CNN Opinion
"We also recognize that, like all of our allies, we will not always agree with or support every Israeli policy or action. Criticism of Israel can be at times fair and appropriate, and part of an important debate about US interests and priorities. But it is vital this discussion focuses on policy differences, not anti-Semitic tropes."
Trump is “impressed” that Cohen said “no collusion.” But Cohen didn’t say that.
The Atlantic
"If nothing else, the Democrats will have to figure out how to negotiate the differences in their coalition on Israel and Palestine to avoid losing more days to headlines blaring another trope: 'Democrats in disarray.'"
Discover more on this topic on AllSides.
US House, Ilhan Omar, Anti-Semitism, Story Of The Week, News