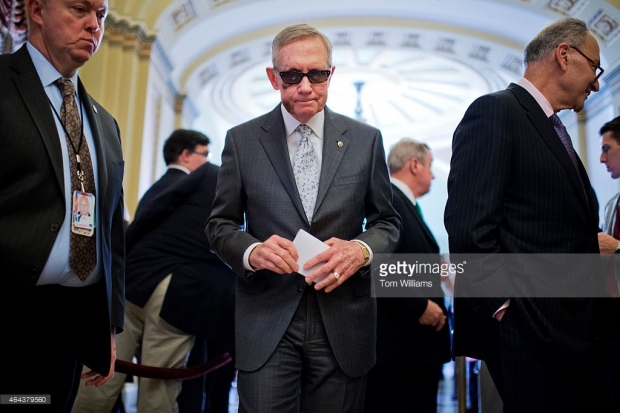 The Senate is closer to preventing a shutdown of the Department of Homeland Security. The DHS runs out of money in two days, but the Democrats have accepted Senator Mitch McConnell's plan to separate the votes on DHS funding and Obama's immigration actions, which breaks the impasse. This week we bring you a multi-sided view into this story.
Snippets from the Right
OPINION: Why the Beltway showdown over Homeland Security is a nothingburger

"For one thing, it wouldn’t be much of a shutdown. About 30,000 of the 230,000 DHS employees would be furloughed, with the rest deemed 'essential' personnel (though they would not receive paychecks until after the impasse is resolved). Security folks would still report to work at the airports, the Border Patrol and the Coast Guard.
But I doubt any of this will happen...
McConnell yesterday was already lining up to punt. He offered Democrats a 'clean' bill that keeps the money flowing to DHS through September--the classic kick-the-can strategy. Separately, Congress could pass a resolution disapproving of Obama’s immigration move while also approving the funding."
Snippets from the Left
Senate Democrats Agree To GOP Plan To Fund Department Of Homeland Security

"Under the agreement..the Senate will resolve the DHS funding issue and then vote on a separate bill from Sen. Susan Collins (R-Maine) to block Obama's executive actions, which would grant temporary deportation relief and work authorization to as many as 5 million undocumented immigrants.
Democrats have said for weeks that they would support only a clean bill without immigration measures, and would be open to discussing immigration separately."
Snippets from the Center
McConnell makes concessions in DHS funding fight

"Rank-and-file Senate Republicans, who were briefed on McConnell's proposal during a closed policy lunch, were divided on the plan.
Nevada GOP Sen. Dean Heller stressed the need to avoid a shutdown before the deadline on Friday to ensure public safety.
'I think everything is threatened at the point -- especially after what you are seeing going on in Paris and Copenhagen. The last thing we need is for something to happen in Las Vegas or to happen in New York. It's an economic issue - security is paramount,' he said.
Texas Republican Sen. Ted Cruz refused to comment immediately following McConnell's statement, but his office later distributed a release that said, 'Leadership's current plan -- to pass clean DHS funding and separate legislation barring executive amnesty -- is a mistake.'"
Discover more on this topic on AllSides.
Homeland Security, News