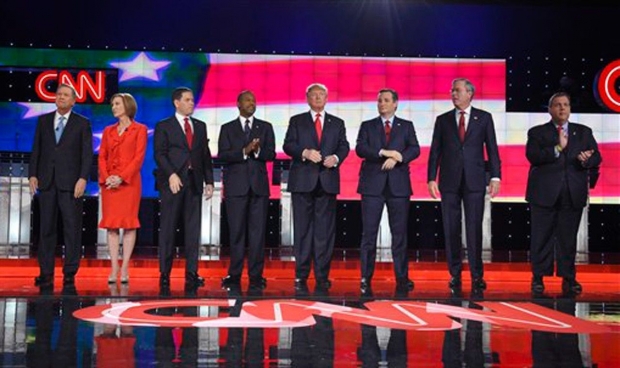 This week in Las Vegas, the GOP candidates’ had their fifth debate. Townhall.com called it, “a serious and substantive discussion of foreign policy and national security.” Terrorism, immigration, and foreign oil were among the topics debated. Was every point made by every candidate factual? Let’s see what different sides of the media have to say.

See other news featured by AllSides such as Gun Charges Expected in San Bernardino, Obama Seeks to Allay Terrorism Fears, World Agrees to Climate Deal and the latest AllSides News.

Snippets from the Right
Fact Check: While Suggesting Rubio Lied, Cruz Misstates Own Immigration Record
TownHall
“When the debate questioning turned to Cruz, he pounced, understandably and correctly pointing out that he helped lead the charge against the Gang of Eight's bill.  He went on to say that one of the most ‘troubling aspects; of that legislation was that it would have granted President Obama blanket authority to admit refugees, including Syrian refugees, ‘without any background checks whatsoever.’ This claim is factually false.  There are plenty of aspects of that proposal that invite serious critiques, which makes inventing one to exploit a current prevailing public fear look even cheaper. In response, Rubio charged that Cruz supported mass legalization of illegal immigrants and proposed huge increases in federal issuance of certain immigration visas and green cards. Cruz shook his head throughout Rubio's rejoinder, but Rubio was correct on these points.”
Snippets from the Left
The 10 most bald-faced lies from the final Republican debate of 2015
Salon
“2. Marco Rubio claims Assad created ISIS.This is an old canard, and one that even nominally lefty outlets like Vox like to push, but it has little to do with reality. In an effort to shore up his neocon credentials, Rubio has doubled down on regime change in Syria while other GOP candidates like Paul and Cruz – as well as Bernie Sanders – have run away from this position. To do this Rubio has pushed the conspiracy theory that the reason ISIS grew in Syria is because the U.S. didn’t back the rebels opposed to Assad when in fact the CIA, according to documents revealed by Edward Snowden, spent $1 billion a year arming, funding and assisting the opposition.
3. Donald Trump cites bogus poll that 25% of Muslims condone acts of violence. …the bogus stat that 25% of Muslims support violence is thrown around quite often. But it originates from noted Islamophobic “think tank” Center for Security Policy. As the New York Times notes:
Mr. Trump vouched for the group at a rally on Monday night. But the poll — conducted by the Polling Company, a Republican firm — is in no way truly representative of all Muslim Americans because of its methodology. The poll was not based on a random sample, but included only people who chose to participate, and therefore is not representative of the population being studied. In addition, some of the questions were leading and biased.”

Fact check: The fifth Republican debate
FactCheck.org
“Sen. Ted Cruz wrongly claimed that the immigration bill Sen. Marco Rubio cosponsored in 2013 would have allowed the president to admit refugees without “any background checks whatsoever.” And Cruz claimed that the FBI director told Congress “they cannot vet [Syrian] refugees.” That’s not exactly what the director said.
…
Former Sen. Rick Santorum was incorrect in claiming Muslim immigration to the U.S. has doubled since 9/11. Estimated legal immigration by Muslims has gone up that much from 1992 to 2012.
…
Trump said the mother of the San Bernardino shooter had advance knowledge of her son’s plans, but officials have made no such charges or accusations.”
Discover more on this topic on AllSides.
News, GOP, Debates