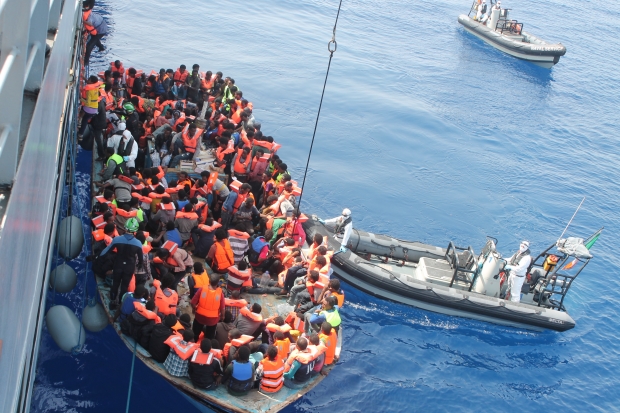 Today we step outside the United States to look at the refugee crisis happening throughout Europe. Which countries are stepping up to help the Syrians who are leaving their home country in alarming numbers? Has the United States offered to help? Take a look at a few different media perspectives on this story.
Also check out the newest in our guest blog series by Beth Ballentine Guess what? “Left” and “Right” aren’t our only political options and see other news featured by AllSides such as Iran Deal Protests on Capitol Hill, Judicial Review or Religious Freedom and the latest AllSides News.
Snippets from the Right
The Past and Future of the Refugee Crisis
Town Hall
"The refugee crisis in Europe is one of those human tragedies for which there are no real solutions, despite how many shrill voices in the media may denounce those who fail to come up with a solution. Some options may be better than others, but there is nothing that can honestly be called a solution. Nevertheless many countries, including the United States, could do a lot better....The immediate problems are the masses of desperate men, women and children, fleeing from the wars and terrorism of the Middle East, who are flooding into Europe. But the present crisis cannot be dealt with as if it had no past and no future."
Snippets from the Left
Refugee Crisis: Innovative Ways Germans Are Welcoming Them
ABC News
"Nearly 20,000 refugees arrived in Munich over the weekend, according to Bavarian authorities. And while there has been sporadic anti-migrant protests across Germany recently, many locals are finding original and heartwarming ways to welcome refugees.The generosity of the German people has extended beyond train stations from classrooms to kitchens...."Germany will be able to take in 500,000 refugees a year for a few years," Chancellor Angela Merkel's deputy Sigmar Gabriel said on local TV Monday, meaning Germany will be accepting more asylum seekers than any other European country."
Snippets from the Center
U.S. Weighs Offering More Help As Migrants Arrive In Europe
NPR
On Monday, both France and Britain pledged to accept thousands of migrants, but the numbers — 24,000 for France and 20,000 for Britain — are vastly different from the pace set by Germany, which over this past weekend welcomed at least 20,000 migrants. Chancellor Angela Merkel also said that Germany is devoting $6.7 billion to cope with the crisis. ...As for what steps the U.S. might take, the White House says it is looking at "a range of approaches to be more responsive to the global refugee crisis, including with regard to refugee resettlement." The administration adds that with the U.S. having provided over $4 billion in humanitarian assistance since the Syrian crisis began, and over $1 billion in assistance this year, "The U.S. is the single largest donor to the Syrian crisis."
Discover more on this topic on AllSides.
News, Migrant, Europe, Syria