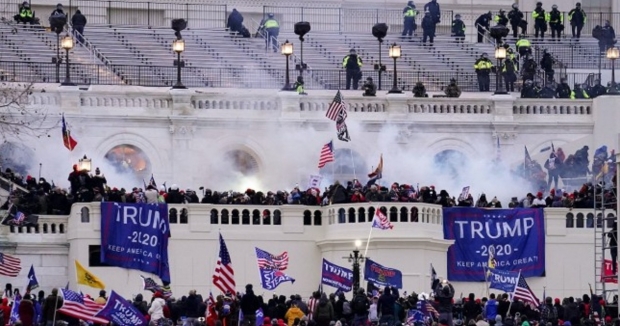 More than a year later, the aftermath of the 2020 election still looms large, and the electoral process remains a hot-button issue nationwide.

The House select committee investigating the Jan. 6 Capitol riot voted this week to hold Mark Meadows, former President Donald Trump's chief of staff, in contempt of Congress for refusing to cooperate with the probe. The full House voted 222-208 to approve the resolution on Tuesday, mostly along party lines. Among other things, the panel revealed texts sent to Meadows on the day of the riot from prominent Fox News hosts and Donald Trump Jr., urging Meadows to tell the president to discourage the violence. Trump's legal team continues to challenge the panel's subpoenas.

Elsewhere, elections and voting are still a top focus of policymakers and activists, especially ahead of the 2022 midterm elections. New York's city council approved a measure this week allowing nearly 900,000 non-citizens to vote in local elections, and legislatures in 44 states are currently redrawing election maps in the decennial process that will shape Congressional elections for the next 10 years.

Left- and center-rated media have covered the Jan. 6 panel's activity and its vote against Meadows more prominently than right-rated sources. Some voices on the left said the texts revealed by the panel prove the hypocrisy of conservatives who purportedly championed the effort to overturn the election in public, but may have privately opposed it. Some on the right said the texts vindicated their senders by showing their disapproval of the violence. Voices across the spectrum were generally split on the legality of allowing non-citizens to vote; some on all sides condemned hyperpartisan redistricting.

Hannity, Ingraham knock Jan. 6 panel after revelation of texts to Meadows
The Hill

"Hannity hosted Meadows on his program on Monday night but did not ask him about or reference the text messages between him and the former chief of staff, which had been read aloud by Cheney hours earlier. Appearing on Newsmax on Monday, Meadows said the messages he received from the Fox News hosts have been 'weaponized' in an attempt to cast Trump in a negative light."

A member of Congress apologized to Mark Meadows for not overturning the election on January 6: 'I'm sorry nothing worked'
Insider

"Even though Meadows stopped cooperating, the panel is already in possession of valuable records, including text messages and emails that Meadows and his attorney voluntarily turned over to the committee. Meadows used a cellphone, two Gmail accounts, and a Signal account to conduct official White House business and communicate during January 6. "

"The bottom line is there is much less to the texts story than the critics would have you believe. Of course, don't look for those critics to admit that. Some of them have been attacking Fox for years and are not going to stop now. Before you accept their spin, take a look at what Ingraham and the others actually said."

"Gerrymandering removes any incentive for members of congress to attempt to represent all the people in their districts. Instead of trying to win the general election by seeking the middle ground, politicians need only to win their party’s primary to prevail in the end. As a result, extremists are empowered, making our political system increasingly dysfunctional. "

Mark Meadows' Jan. 6 texts remind us how much we don't know
MSNBC (opinion)

"So yes, some Republicans were terrorized into backing Trump’s claims of election fraud. But the texts to Meadows remind us of something just as important: Despite that some felt pressured into going along with the vote against certification, there were members who wholeheartedly backed the president’s attempt to overturn the election."

Let the people vote. But which people?
CNN (opinion)

"Together, felons and noncitizens represent a fairly large proportion of society -- tens of millions of people -- that is not able to take part in federal and state elections. It's not easy to figure out exactly how many people live in the US but can't vote here. The 2020 census notably did not ask whether a person is a US citizen."