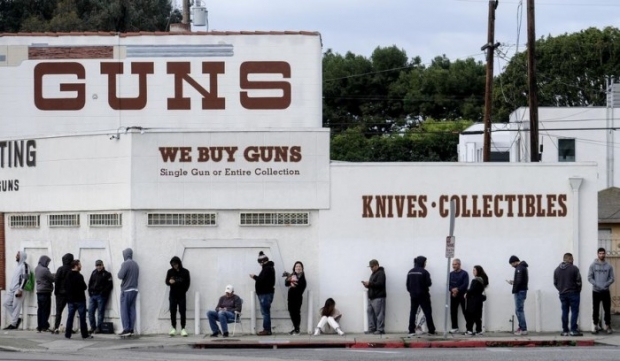 Amid a recent surge in violent crime and shootings, Americans' concerns about crime are at a four-year high. An ABC News/Washington Post poll conducted in June found that 59% of Americans believe crime is an “extremely” or “very” serious problem. At least 150 people were killed in shootings across the U.S. over the Fourth of July weekend; on Tuesday, New York Gov. Andrew Cuomo declared a "gun violence disaster emergency." The same ABC/WaPo poll found that 48% disapprove of President Joe Biden's handling of crime so far, compared to 38% who approve and 14% who offered no opinion.

Violent crime has made headlines across the spectrum recently. Coverage from left-rated sources often frames the violence alongside the push for more gun control laws, and sometimes paints the political right as indifferent toward public safety. Reports from right-rated outlets often tie crime to the need for more police, typically in the context of calls to defund police departments, and Democratic leaders purported unwillingness to admit that. Left-rated outlets focus more on the Biden administration's stated plans for combatting crime; right-rated sources concentrate on public concern about crime and Biden's management of it.

Is America seeing a surge in violence?

"Police departments across the US define violent crime in slightly different ways, but the data usually includes murder, robbery, assault and rape. Overall, violent crime was up by about 3% in 2020 over the previous year, but this should be seen in the context of the longer term downward trend from a peak in the early 1990s."

"The Rand Corporation, a nonprofit think tank, has analyzed thousands of studies on gun policy research published since 1995. In a report released last year, researchers concluded there was a surprisingly limited base of scientific evidence on the effects of commonly discussed gun policies. Among the thousands of studies researchers reviewed, 123 studies conducted since 1995 were found to have met high standards for evidence."

"New York needs its cops getting guns off the streets, and its prosecutors and judges jailing those caught with illegal firearms. But the politicians have spent the last several years making that work near-impossible: That’s the “root cause” of the crime spike Cuomo pretends he’s addressing, and his own fingerprints are all over it."

"Mr. Biden’s speech made clear that he intends to approach crime prevention by investing in, rather than defunding, the police — wading into a national debate about whether the government should give police departments more resources, or spend the money on mental health and other social services instead. The president tried to appeal to both sides on Wednesday, saying from the White House that “this is not a time to turn our backs on law enforcement or our communities.”"

One possible cause of the 2020 murder increase: More guns

"This pattern does not support the idea that overwhelmed police forces weren’t able to take guns off the streets, leading to a surge in violence. Instead, the spike in firearms as a percentage of stops and arrests provides evidence that there were simply more guns on the streets throughout 2020 than in the past, which may have intensified other sources of violence and contributed to the historic rise in murders."