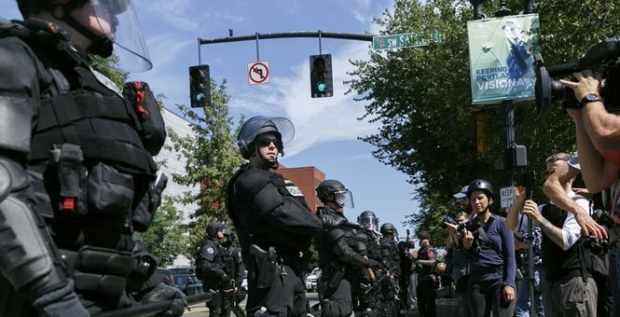 A rally hosted by far-right demonstrators was met by far-left counter protesters on Saturday in Portland, Oregon. The events are the latest in a series of public standoffs between political extremists in Portland, featuring violent episodes and attacks on free speech that have gained the nation's attention.

Coverage of these events differed greatly depending on a media outlet's bias. Some on the left and center chose to label the right-wing groups by name while describing left-wing groups more generally; some voices from the right did exactly the opposite. Some capitalized "antifa," the name of the left-wing group, while others did not, as journalists continue to struggle with properly covering extremist groups. Some left-leaning outlets made reference to Quillette editor Andy Ngo, who was beaten at a Portland rally in June and on hand to cover Saturday's events, as a right-wing antagonist; others on the right described him as a reporter victimized by racially-charged violence.

Free speech remains a central topic of the protests, but they've also shifted more attention to issues like race and racism, the role of government, and violence in America.

One of our core civic values is under fire. Why is empathy, a virtue that helps characterize a healthy society, seemingly being undermined?

"Late Saturday afternoon, Portland Police declared the demonstrations a civil disturbance, more than six hours after they began, and told people to leave the area immediately. Earlier, President Donald Trump threw a spotlight on the tense confrontation by tweeting that the city is "being watched very closely" and that he hopes the mayor will "do his job.""

"As of early afternoon, most of the right-wing groups had left the area via a downtown bridge. Police used officers on bikes and in riot gear to keep black-clad, helmet- and mask-wearing anti-fascist protesters — known as antifa — from following them."

"The events began late Saturday morning. Flag-waving members of the Proud Boys, Three Percenters militia group and others gathered downtown, some also wearing body armor and helmets. Police said they had seized the weapons, including shields, from multiple groups as they assembled along the Willamette River, which runs through the city."

"The rally had mainly been promoted by Joe Biggs, a member of the far-right Proud Boys group and former employee of Alex Jones's Infowars. Proud Boys - which The Southern Poverty Law Center, a major US civil rights organisation, has classified as a hate group - have been involved in previous far-right rallies, and violent street clashes, in Portland."

"President Donald Trump had said the Portland situation was being closely watched by his administration, and indicated that naming antifa "an organisation of terror" was being considered."

"The fascists belonged to far-right groups including the Proud Boys, Patriot Prayer and the Three Percenters. And whereas at previous Portland rallies these groups have often confronted and attacked anti-fascist protesters, this time they were barely given the chance to do so."

"The messaging leading up to this particular rally carried an air of vengeance. Proud Boys billed it as direct action against anti-fascists in response to an incident at a June rally that left far-right blogger Andy Ngo with a black eye. Although bloodied faces have become the norm at these rallies, Ngo’s injuries quickly made him into a cause celebre among the far right, which is eager to depict anti-fascism as a violent movement worthy of government repression."

"Portlandia was more a caricature than a portrait, and locals noted what it left out – rapid gentrification and displacement, increasing homelessness, the contentious policing of the Portland police bureau (PPB) and the long racist history in the Pacific north-west that made Portland the whitest major city in America. The former NBA player Greg Oden said of his time playing in Portland: “It isn’t a great city to live in if you’re a young African American male with a lot of money.”"

"The Oregon hinterland is deeply conservative, and Portland itself has long been a target for far-right organising. In the 1980s and 1990s, neo-Nazi skinheads converged in the streets, and a gang killed an Ethiopian immigrant, Mulugeta Seraw, in 1988."

Stephen A. Crockett Jr. for The Root

"The mayonnaise-smothered clan—which is totally tied to white nationalism, according to the Southern Poverty Law Center—would, of course, consider its “End Domestic Terrorism” rally a success, considering the white nationalist-in-chief took to Twitter to condemn the anti-fascist counterprotesters, aka “Antifa,” which is basically made up of all kinds of people (mostly a bunch of white men, but they are the good guys. Think really skinny vegan X-Men)."

"Trump not only gave [the Proud Boys] national shine but his bitch ass took to Twitter to point out that Portland was “being watched very closely” and that his administration was considering naming the skinny vegans a terror group, something usually reserved for foreign organizations, USA Today reports."

"Fox News' Sean Hannity condemned radical protesters from both political extremes who demonstrated in Portland, Ore., over the weekend, saying there is no place in the United States for physical violence in pursuit of political ends. "To each and every single person on either side that has an extreme agenda, you must stop this insanity — this lawlessness," Hannity said Monday night."

""This show will always condemn hatred on any side," he said adding that both the Antifa and white supremacist factions have one thing in common. "They're all tied to sick, ugly, twisted, evil ideologies.""

So Much For Being 'Peaceful': Antifa Attacks Reporters And Conservatives In Portland (Again)

"Not quite seven weeks ago, conservative journalist Andy Ngo was attacked while covering an Antifa protest in Portland, Oregon. Mayor Tom Wheeler ordered police to stand down at the time and received backlash for doing so. The city prepared for the Proud Boys to hold a rally on Saturday, with Antifa showing up to counter protest. Wheeler made it clear that Portland is taking a "zero tolerance" policy during Saturday's activities."

"At one point, Antifa protestors had The Washington Examiner's Julio Rosas surrounded. They wanted him to report on what was taking place from the other side of the street because he "wasn't with" them."

I spent one day with Antifa in Portland

"A small procession of Proud Boys marching through the park was met only with verbal confrontation from the left-wing demonstrators. But conservative independent journalist Brandon Brown was mobbed and pepper-sprayed after Black Bloc believed him to be associated with far-right activist Haley Adams."

"The police consistently seemed unable to act. While their presence, most of the time, could not be denied, they were unable or perhaps unwilling to enforce the announcements bellowing powerfully over their loudspeakers. Forming impressive, armoured lines that led nowhere and did nothing, the activists quickly learned that there seemed to be no consequences to their actions."