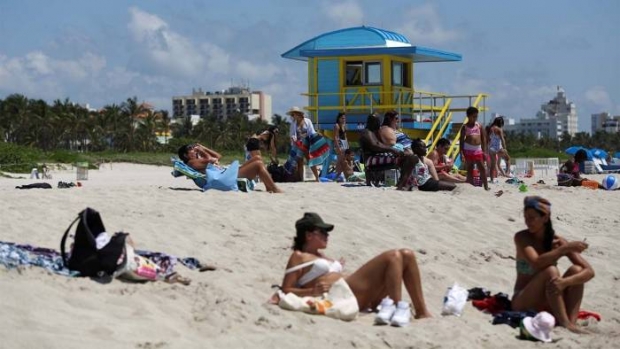 The rise in cases is most pronounced in the Sunbelt region and Idaho, while the number of new cases falls in other states including Massachusetts and New Hampshire. Overall, new cases are at an all-time high in the U.S., totaling nearly 50,000 on Wednesday.

Many reports focused on concern expressed by Dr. Anthony Fauci this week about the pandemic potentially worsening. Coverage from left-rated outlets focused largely on states with rising cases, and the reasons for the upticks. Many also covered President Donald Trump's new support for wearing face masks.

Coverage from many right-rated outlets concentrated particularly on red states, highlighting concerns from Republican leadership that rising cases in Trump-friendly areas could hurt his re-election chances. Some right-rated voices framed the increase in cases as predictable and manageable.

Other big news this week: The U.S. economy added 4.8 million jobs in June; Seattle police cleared the city's "Occupied Zone"; a flurry of questions surrounds alleged Russian bounties on U.S. troops, what the White House knew, and when officials were briefed; New York City Council passed a budget that would shift $1 billion away from the police department; the Supreme Court struck down Louisiana abortion restrictions; and former Vice President Joe Biden and President Trump released information about their staff diversity.

On the Blog: A viral incident in which a couple wielded firearms at protesters who had trespassed on a private street resulted in plenty of media bias; and a recent executive order aimed at improving child welfare provided an opportunity for outlets to focus on some good news. Many missed the chance.

"The recent spike in COVID-19 cases has led to some Republican governors aligned with Trump reinstating some, though not all, of the restrictions that were in place during the lockdowns and federal GOP officials expressing more support for wearing facial coverings in public."

"Republican governors in Texas, Florida, and Arizona all followed Trump’s lead in reopening relatively early. Now, all three have closed the bars again in their states. National Democratic groups are on the air in these key battlegrounds with anti-Trump ads focusing on coronavirus management. Trump is trailing in Florida, where the Republican National Convention is to be held next month, while Arizona and even Texas, which hasn’t voted for a Democratic presidential candidate since Jimmy Carter in 1976, are too close to call."

DeSantis: Florida 'not going back' on coronavirus reopening, despite new case surge

"DeSantis drew the line even as Texas Gov. Greg Abbott last week ordered all bars closed, and Arizona Gov. Doug Ducey told residents to stay home and declared that the state was “on pause." Just last week, after the state recorded 25,000 new infections in just five days and 9,000 in one day alone, Florida once again prohibited the on-premises consumption of alcohol at bars; there are no restrictions on occupancy at gyms or stores."

"DeSantis added that doomsday predictions about Florida's coronavirus numbers were off-base, and urged young residents to "protect the vulnerable" by socially distancing and steering clear of the elderly -- stopping short of other governors, who have suggested residents should generally stay home. "We're open, we know who we need to protect, most of the folks in those younger demographics, although we want them to be mindful of what's going on, are just simply much much less at risk than the folks who are in those older age groups," DeSantis added."

Paused COVID-19 Reopenings Reflect Setbacks, Not a Failure of Protocols

"The recent surges in COVID-19 cases and hospitalizations in Texas, Florida, and California have forced their governors to pause their states’ reopening plans to restrict further spread and to prevent area medical systems from being overwhelmed. Some are claiming that means reopening plans are not working and represent reckless behavior. In reality, however, the governors are appropriately pausing to assess the developing situation and react to the new data."

"As expected with reopening, we have begun to see incidences of COVID-19 begin to rise again. That’s no surprise. From the beginning, we knew reopening could result in rising case numbers and that there may be hot spots where a governor or mayor might need to target mitigation measures to stop and slow the spread of the disease. States are in various stages of reopening, with many officials implementing a phased approach. The purpose of the phased plan was for a more predictable and manageable pattern of cases."

"California, Michigan and New York City became the latest areas on Wednesday to pause some aspects of their reopening efforts as new cases spike across the country. Amid the surge, President Donald Trump said he’s “all for masks,” but he doesn’t think the U.S. needs a national mandate for people to wear them during the pandemic."

"The country reported about 50,700 new cases Wednesday, according to data compiled by Johns Hopkins University, bringing the total number of confirmed U.S. cases to more than 2.68 million. The U.S. has more confirmed cases than any other country in the world, followed by Brazil, Russia, India and the U.K. Earlier this week, White House health advisor Dr. Anthony Fauci said the U.S. could hit 100,000 new cases per day if the outbreak continues on its current trajectory without more severe interventions or major behavioral changes among the U.S. public."

How Success Against the Coronavirus Turned to Crisis in California

"Nearly 6,000 people tested positive for the new coronavirus in California Tuesday, and more than 7,000 on Monday, the highest total during the pandemic and a 45% increase over the previous week. Hospitalizations are up more than 50% from two weeks ago. The percentage of tests coming back positive was 6% on Tuesday, up more than a full percentage point from two weeks earlier."

"Through the early months of the outbreak, California took a cautious approach. Mr. Newsom was the first governor to issue a statewide shelter-in-place order. In early May, as other states were reopening, he told Californians to wait. With case counts stable, however, pressure soon began to mount on Mr. Newsom. Several counties began allowing businesses to reopen, in defiance of state rules. Sheriffs in Riverside and Orange counties said they wouldn’t enforce social-distancing regulations. Lawsuits challenged the state’s ban on churches gathering in person."

Why many small businesses are to blame for rising coronavirus cases

"The rise in cases is not just the fault of younger people, religious extremists and more testing. It's a result of bad and illegal practices by many small business owners across the country. I’m an advocate for small business — but not for these small businesses."

"They're turning a blind eye to the crowds of customers pushing through their doors. They're gambling that police and local officials are too busy with protests and other matters to pay them much attention. They're ignoring customers not wearing masks and crowd limitations. They’re exercising their First Amendment rights and exhibiting their political leanings. Those small businesses that generated so much sympathy and outpouring of compassion during this pandemic are now risking all of this political capital…for a few bucks."

Actually, 20% of US lives in a virus hot spot

"Vice President Mike Pence and Health and Human Services Secretary Alex Azar have said that only 3% or 4% of counties in the country are seeing a surge in cases. Focus on the “encouraging signs,” Pence told senators last week. But they and other administration officials are skirting a key fact: More than 20% of Americans live in those relatively few counties."

"In recent weeks, the U.S. has entered a dangerous new phase of the coronavirus with big Sun Belt states showing thousands of new cases a day. Texas and Florida reversed course on parts of their reopening and clamped down on bars last week as the daily number of confirmed infections in the U.S. surged to all-time highs. Speaking about the coronavirus threat Friday, White House coordinator Dr. Deborah Birx explained that counties large and small are being tracked by the White House task force, and that anyone living in a virus hot spot should take the necessary precautions, including social distancing and wearing a mask."

"Many prominent Republicans and conservatives — Vice President Mike Pence, former Vice President Dick Cheney, Senate Majority Leader Mitch McConnell, “Fox and Friends” host Steve Doocy, Trump whisperer Sean Hannity — have sent a similar message in recent days as coronavirus cases have spiked, especially in red states through the Sun Belt. For the many conservative voters who look to their leaders for guidance, today just might be the start of a sustained public health campaign that could save lives."

"Even the states that have made the most progress aren’t necessarily ready to fully reopen. Without a vaccine or similar treatment, the threat of coronavirus is still out there. Especially in states that suffered big outbreaks, such as New York, even a lot of progress doesn’t mean all the underlying problems that led to an epidemic are gone."

"Reported cases can be a reflection of testing capacity: More testing will pick up more cases, and less testing will pick up fewer. So it’s important that the decrease occur while testing is either growing or already sufficient. And since states have recently boosted their testing abilities, increases in Covid-19 cases can also reflect improvements in testing. Even after meeting this benchmark, continued caution is warranted. If a state meets the goal of a reduction in cases compared to one and two weeks ago but cases seemed to go up in recent days, then perhaps it’s not time to reopen just yet."