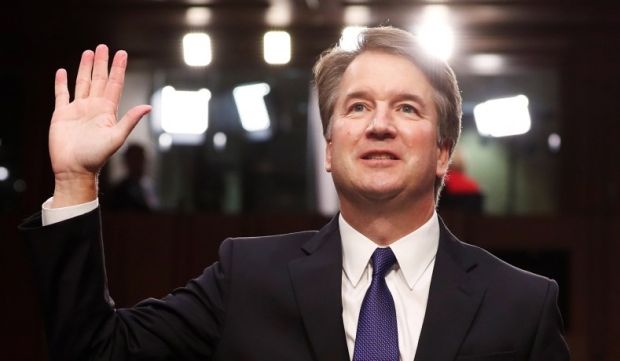 Brett Kavanaugh's Supreme Court confirmation hearings began on Tuesday, sparking heated debate across the aisle as the nominee could change the high court's makeup for decades.
Opponents claim that his record will damage liberal causes, particularly women's rights, same-sex marriage, and gun control, and that he will not effectively stand up to Trump on matters of Russia collusion. Supporters argue that he is a principled conservative who will not legislate from the bench, with many saying that Democrats are fighting his nomination for the sake of political theatre.
Check out some other big stories this week: Senior Official in Trump Admin Pens Anonymous Op-Ed in NYTimes: 'I Am Part of the Resistance', Colin Kaepernick Made New Face of Nike's 'Just Do It' Campaign, and New Book by Bob Woodward Alleges 'Administrative Coup D'etat' in the White House.
And take a look at our new blog post: Our data at shows Google News is heavily biased — but it's not rigged, as President Trump recently suggested. AllSides CEO John Gable explains more in the Washington Examiner.
Snippets from the Right
The Kavanaugh Show Trial Begins
National Review
"In conjunction with their allies — rude, screaming protesters in the audience, whom Senator Dick Durbin (D., Ill.) praised — Democratic senators repeatedly interrupted and harangued chairman Chuck Grassley (R., Iowa) in what Senator John Cornyn (R., Texas) properly categorized as a descent into 'mob rule.'
...
Senator Ben Sasse (R., Neb.) pointed out that the outrageous claims being made about Kavanaugh are absurd, including that he supposedly hates women, hates children, hates clean air, wants dirty water, and is an 'existential threat to the nation.'
...
The protesters were so obnoxious and rude, too, that Judge Kavanaugh’s wife was forced to take their two daughters, aged 13 and 10, out of the hearing room. Progressives who think this kind of obnoxious behavior helps their cause could not be more wrong. Americans don’t like incivility. They don’t like protesters — including senators — who disrupt public events and engage in boorish, disrespectful behavior.
But then, Democrats are playing to their most rabid supporters and donors, who have about as much in common with the average, hard-working American — the silent majority, as it was once called — as a conman does with an honest man. The behavior we saw on the first day really was a stench in the nostrils of honest men."
Snippets from the Center
Kavanaugh Pledges Fairness as Supreme Court Justice
Wall Street Journal
"Supreme Court nominee Brett Kavanaugh wouldn’t say whether a president could pardon himself or must comply with a subpoena, instead promising senators Wednesday to be an independent justice unswayed by politics.
...
Judge Kavanaugh followed a longstanding nominee playbook in avoiding subjects that could come before the Supreme Court. But he said that however he resolves a case, he believed the losers should feel they got a fair hearing and the public should know he understands the power he would wield as a justice.
'I don’t live in a bubble. I live in the real world,' he said.
...
Judge Kavanaugh is a known quantity in Washington, both as a conservative on the U.S. Court of Appeals for the District of Columbia Circuit and his prior work in Republican politics. Democrats attempted to make the most of their brief opportunity to unsettle the nominee and cloud a process likely to lead to his narrow confirmation later this month."
Snippets from the Left
Kavanaugh Ducks Questions on Presidential Powers and Subpoenas
New York Times
"Judge Brett M. Kavanaugh, President Trump’s nominee to the Supreme Court, on Wednesday dodged direct questions about whether the Constitution would allow Mr. Trump to use the powers of the presidency to thwart the Russia collusion and obstruction investigations that are swirling around his administration.
...
Under attack from progressives and Democrats who say he will roll back abortion rights, Judge Kavanaugh said he believes that Roe v. Wade, the 1973 landmark Supreme Court case establishing a woman’s right to an abortion, was 'settled as a precedent of the Supreme Court,' and as such, deserves respect from judges. But he did not say whether he believes Roe was correctly decided. But then he noted a subsequent case, the 1992 case of Planned Parenthood v. Casey, which narrowed the scope of Roe at the same time that it reaffirmed Roe as a precedent.
...
Democratic senators angrily railed against a swiftly moving confirmation process, accusing Republicans on the committee of refusing to make public documents that they said call into question Judge Kavanaugh’s honesty about his past congressional testimony and his record as a political operative and a lawyer in the Bush White House."
Discover more on this topic on AllSides.
Supreme Court, Brett Kavanaugh, Story Of The Week, News