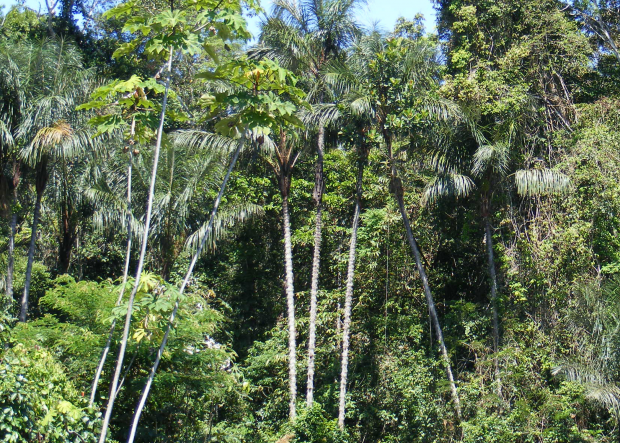 Fires have burned parts of Brazil's Amazon rainforest, setting up an international feud between Brazil and some the world's largest economic powers, and prompting a widespread social media buzz on climate change and big government.

The media's Amazon fire coverage is politically split in many cases; some voices, particularly on the left, are focusing coverage more on Bolsonaro's perceived anti-environment administration and the lasting effects of the fires. Most reporting from the right has downplayed the fires' extremity, with some right-leaning commentators blaming media personalities and celebrities for exaggerating the situation.

Check out some other big stories this week: Trump hints at hosting G7 at his Doral, FL golf resort, Facebook bans ads from the Epoch Times, and Johnson & Johnson ordered to pay $572 million by Oklahoma judge.

Fires are far from the only thing media outlets disagree on. AllSides' Julie Mastrine evaluated recent electoral college coverage from Fox News and the New York Times that differed significantly.

"A lot of the fires burning now are persistent, and that means that those are felled forests - the giant rainforest trees that have been cut down with chainsaws, allowed to dry, and now they're being burned in preparation for crops or pasture or whatever. A lot of smoke because there's so much tree biomass, a lot of energy, meaning that smoke goes really high into the atmosphere - and it can spread across entire regions."

"Every time a little droplet of water leaves a leaf and goes into vapor, it's absorbing energy and it's cooling things down. And the Amazon is so big that if we lose it, it's going to change the way air and energy move around the planet, and that means our climate will change."

"French President Emmanuel Macron was one of the first foreign leaders to tweet about the fires. Macron came under criticism for sharing an outdated photo on social media. Celebrities like Leonardo DiCaprio and Madonna also shared incorrect photos. Some of the images were of past fires in the Amazon and others weren't of the Amazon at all."

"It doesn't take much work. If you spot an image on social media or another website, try to do a reverse image search. In Google Chrome (or a Chrome-compatible browser like Brave) simply right-click on the image and choose Search Google for Image. This works if you install the Chrome Extension or at images.google.com."

Why Everything They Say About The Amazon, Including That It's The 'Lungs Of The World,' Is Wrong

"I was curious to hear what one of the world’s leading Amazon forest experts, Dan Nepstad, had to say about the “lungs” claim. “It’s bullshit,” he said. “There’s no science behind that. The Amazon produces a lot of oxygen but it uses the same amount of oxygen through respiration so it’s a wash.” Plants use respiration to convert nutrients from the soil into energy. They use photosynthesis to convert light into chemical energy, which can later be used in respiration.

"The “lungs” myth is just the tip of the iceberg. Consider that CNN ran a long segment with the banner, “Fires Burning at Record Rate in Amazon Forest” while a leading climate reporter claimed, “The current fires are without precedent in the past 20,000 years.” While the number of fires in 2019 is indeed 80% higher than in 2018, it’s just 7% higher than the average over the last 10 years ago, Nepstad said."

"The Brazilian leader's demand for an apology follows Macron lashing out after a Bolsonaro supporter mocked [French president Emmanuel] Macron's wife, Brigitte, in a Facebook post, comparing her to Bolsonaro's wife, Michelle, and suggesting Macron was jealous."

"President Donald Trump on Tuesday defended Bolsonaro's efforts and tweeted that he has the backing of the United States. Bolsonaro "is working very hard on the Amazon fires and in all respects doing a great job for the people of Brazil - Not easy," Trump wrote Tuesday."

People have donated millions to fight the Amazon fires. Will the money help?

"Donors generally trust that the organizations they’re giving to will use their money to ethically further the cause, says Stanford University professor Rob Reich, who has written several books on philanthropy and civil society. Still, there’s a broad assumption perpetuated by social media hashtags like #SaveTheAmazon and #ActForTheAmazon that donations will relieve climate change or curb the fires’ impact. According to advocacy groups, donated funds are typically used for longer-term projects and support for indigenous communities, like research or government lobbying."

The Trump Ally Who Is Allowing the Amazon to Burn

Carol Pires for The New Yorker

"This week, Bolsonaro’s disdain for environmental-protection measures attracted global attention when he initially rejected an offer of twenty million dollars in international aid to help fight forest fires burning in the Amazon. The proposed funding was one of the few concrete achievements to come out of the annual G-7 summit of the world’s largest democracies."

"Bolsonaro and his cabinet have rolled back environmental regulations across Brazil. His Minister of Agriculture, Livestock and Food Supply is a former congresswoman known as the “queen of poison,” a reference to her effort to lift restrictions on the use of pesticides. Since Bolsonaro took office, in January, the agriculture ministry has approved hundreds of new pesticide products, some of which have been banned by the European Union."

"Although the fires pose a danger to the massively biodiverse area, some experts are now offering another view, saying they do not threaten the planet's oxygen supply. According to Scott Denning, professor of atmospheric science at Colorado State University, most of the oxygen that gets produced by photosynthesis each year is consumed by fires and living organisms, with trees shedding dead leaves and twigs that in turn end up feeding insects and microbes."

"Net production of oxygen by forests — and indeed, all land plants — is very close to zero," Denning explained on Tuesday in a Scientific American essay."

"“On the question of burning in the Amazon, which in my opinion may have been initiated by NGOs because they lost money, what is the intention? To bring problems to Brazil,” Bolsonaro said, according to The Guardian. He made similarly baseless allegations earlier when he suggested the environmental groups were going out with cameras and starting fires in the Amazon. When asked for any evidence to back up those claims, he said it was just his feeling."

"Danicley Aguiar of Greenpeace Brazil pushed back on Bolsonaro’s claims that environmental groups are setting the blazes and placed blame on his administration."

Gregory Wrightstone for The Epoch Times

"First, the satellite fire data referenced only began in 2013, so six years of data is hardly long enough to make statements about “record breaking” in any context. Secondly, the satellite data collected wasn’t intended to be used as a counting tool for number of fires, but rather as a readiness alert system to identify fires before they rage out of control. It turns out that the same fire might be counted more than once to ensure that none are missed."

"The Amazonian rainforest is a powerful and necessary ecological niche, and conservation efforts have been effective at stemming the worst of deforestation abuses. The promotion of alarmist and false information misdirects the energies of people, including world leaders, and undermines trust in media and public institutions."