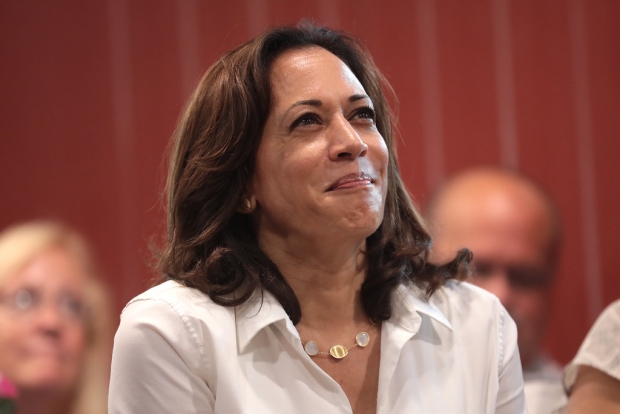 In June, Biden pledged to select a woman of color as his vice president, and over the past few weeks, Harris emerged as a clear frontrunner. A photograph of Biden's notes revealed Harris' name among the list of talking points, along with the phrase "do not hold grudges”; some reports suggested as early as last week that Biden had narrowed the field to two candidates; Harris and Obama administration national security advisor Susan Rice.

Coverage from the left tended to highlight the fact that if the Biden-Harris ticket succeeds, Harris would break multiple demographic barriers. Others concentrated on her credentials and resume. Some voices on Twitter noted that several different left- and center-rated news outlets referred to Harris in their headlines as a "woman of color," and a "black woman," while others referred to her South Asian heritage.

Some voices from the right highlighted Harris' past criticism of Biden, including her 2019 statement that she believed Biden's sexual assault accusers. Others framed her purportedly weak resume and questionable history as a prosecutor as a positive for President Donald Trump. Some coverage also examined her credentials; other voices highlighted past instances from Harris’ political and criminal justice careers that paint her in a negative light.

On the Blog: We explain why we don't capitalize racial signifiers such as "black" and "white" in our content. Check it out, and let us know what you think: feedback@allsides.com; the impact of college football cancellations will go far beyond your couch on Saturday afternoons, and could even influence the 2020 election.

More from AllSides: Feedback Needed: Help us test drive our new video platform, AllSides Connect™! Join us 8/18-8/20 to experience online civil discourse and give us your feedback — all in 30 minutes or less! Sign up here; AllSides created a Facts and Fact Checking portal, where you can see the latest fact checks on a variety of topics and issues. You can also now support our work and mission by becoming a sustaining member of AllSides. Sustaining memberships allow you to read AllSides ad-free.

Why Kamala Harris Is the Right Choice for Vice President

"Kamala Harris was the best available choice for a few reasons. Obviously, she’s history-making, the first Black woman to be a major-party veep nominee. She’s smart and tough and will probably be an effective attacker of the incumbent. She has charisma, she’s relatively young, and standing up there next to Biden, she lowers his age about five years."

"The knock on Kamala Harris, presidential candidate, is that she was all California flash and no substance: She was impressive on paper and had an inspiring background, but she lacked an ideological compass. Critics point to many examples of political expediency that would make Mitt Romney blush, but the most high-profile one was on Medicare-for-All, the signature policy issue of the 2020 Democratic presidential primary season."

You have to win first: What Joe Biden's pick of Kamala Harris tells us about Biden

"Biden never looked more stunned during the primary campaign than when Harris questioned his record on race, demanding in one early debate, "Do you agree today that you were wrong to oppose busing in America?" Biden's decision to tap her as running mate shows a willingness to move past a painful exchange that is sure to be replayed in opposition TV ads."

Kamala Harris VP pick: How she could help - or hurt - Joe Biden

"Sincerity, or at least the appearance of it, is a virtue voters prize - and part of the reason why Donald Trump became president. While his supporters didn't always agree with him, they felt like he speaks his mind. Harris's move from moderate, then to the left and now back, perhaps, to the Biden middle could leave some voters wondering where her core values lie - or if she has any core values at all."

Biden gives Trump a gift: All of Kamala's baggage

"Harris's own presidential bid against Biden will provide ample ammunition for Trump. Consider, while Harris was trying to smear Biden as a racist for failing to back federally mandated busing, a stance she didn't even believe, Biden dominated the majority of the black vote. So, not only will Harris not likely improve black voter turnout, but she also probably won't motivate more turnout among women, with which she flamed out in the primary."

"In her first speech since Joe Biden selected her as his running mate, Senator Kamala Harris told multiple lies. To wit: “The president’s mismanagement of the pandemic has plunged us into the worst economic crisis since the Great Depression,” Harris said. False. The pandemic and its associated lockdowns, not the president, are responsible for the economic contraction."