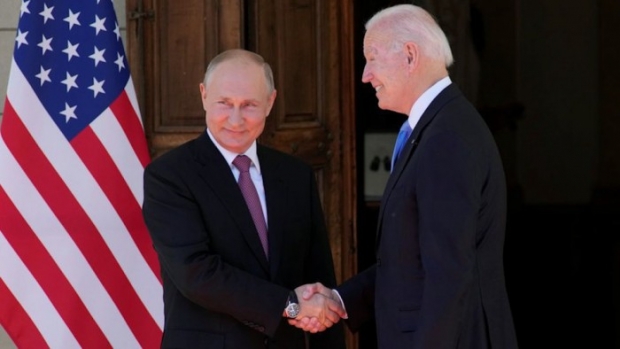 President Joe Biden traversed Europe over the past week, meeting with multiple foreign leaders in the first international trip of his administration. He met with the leaders of the G7 nations in the United Kingdom last week; some big stories were their commitment to sending 1 billion vaccine doses to needy countries, and their call for an independent investigation into the COVID-19 pandemic's origins. The president then attended a NATO summit in Belgium on Monday before heading to Switzerland Wednesday for a meeting with Russian President Vladimir Putin. The two discussed cybersecurity, human rights and strategic stability during the three-hour talk, which they both spoke positively of afterwards.

Biden's foreign travels, especially the Putin meeting, were a top subject of coverage across the media spectrum this week. Right-rated voices often concentrated more on Russia, Putin and the various threats they say Russia poses to the U.S.; some also framed Biden as incapable of keeping up with leaders of other foreign powers. Coverage from left-rated outlets framed Biden's abilities with less skepticism, while also highlighting concerns about Russia and international tension regarding Russia-U.S. relations.

"In their first face-to-face meeting, President Biden and British Prime Minister Boris Johnson signed a 21st century version of the historic Atlantic Charter, an attempt to depict their countries as the chief global leaders taking on the world's biggest challenges...The charter encompasses a commitment to cooperate on climate change, technology and science. It also reaffirms support for NATO while underscoring opposition to election interference and disinformation campaigns."

"The summit yielded little tangible policy progress, but both leaders said they hoped it would set the stage for more cooperation over time. Mr. Biden said, however, he wasn’t confident Mr. Putin would change his behavior without pressure from the world’s democracies."

"Even on topics that Biden hinted at a tougher stance, such as his threat of retaliation in further cyberattacks on American economic and utility sectors, he was unclear as to whether this retaliation would follow Russian ransomware attacks. Instead, Biden said he had asked the Russian delegation what they would think if U.S.-based ransomware hackers disrupted Russia’s oil-export market."

Biden calls tone of Putin meeting 'positive,' says he made 'no threats' but warned of consequences

"Biden said the meeting was 'good, positive,' and their discussion was 'not done in a hyperbolic atmosphere.' 'This is about how we move from here,' Biden said. 'This is about practical, straightforward, no-nonsense decisions that we have to make, or not make.' But Biden maintained that the relationship with Russia is 'not about trust,' but 'self-interest and verification of self-interest.'"

"Fresh off a face-to-face meeting with Vladimir Putin, President Joe Biden made the case that the Russian president knows he needs to improve the country’s reputation on the international stage. Putin is afraid, Biden surmised, that “his credibility worldwide shrinks” as Russia’s human rights abuses, attacks on the free press and reputation for meddling in foreign elections increasingly define how the rest of the world regards the country."

"The stagecraft played to Putin’s personal vanity and his long-standing desire for Russia to be taken seriously as a major rival to the U.S. The summit setting was designed to place the two leaders on equal footing, and emphasize the global power they each hold."