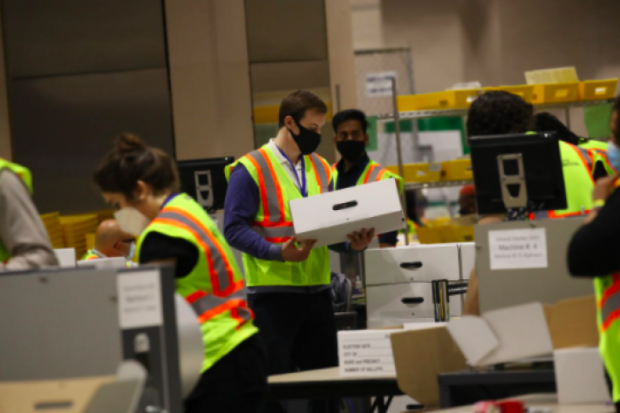 UPDATED 11/7/20 at 7:00 p.m. ET: Former Vice President Joe Biden was projected the winner of the 2020 presidential election Saturday by multiple major news networks, as his vote tally reportedly passed President Donald Trump's in the key states of Georgia and Pennsylvania.

Original Article: As of Friday, former Vice President Joe Biden leads President Donald Trump in the Electoral College vote count. Several key states have yet to finish counting votes and remain too close to call. The president has begun initiating legal challenges to vote-counting processes in some of the states, alleging flaws and conspiracies against him.

Election coverage on all sides has focused on live vote-counting and the president's moves toward litigation. Some left- and center-rated sources have concentrated on debunking purportedly false claims about the election and voting processes. Many right-rated sources have focused on claims of voter fraud, as well as widespread media inaccuracies in forecasting Trump's election performance.

On the Blog: Here's a 2-minute breakdown of what Trump and Biden both said about polarization and the need for unity during their campaigns; and if the state of partisanship in the U.S. concerns you, read about how the next generation of Americans is advancing new bridge-building efforts.

More from AllSides: Social media platforms limited the visibility and virality of purportedly false posts about the election from Trump and others; We signed our name to The Peace Alliance's statement committing to promote peace and patience post-election, alongside a multipartisan group of individuals and organizations. You can sign your name here; and you can also now support our work and mission by becoming a sustaining member of AllSides. Sustaining memberships allow you to read AllSides ad-free.

"President Donald Trump’s re-election campaign filed lawsuits in multiple states on Wednesday where election results are tight and could ultimately determine who wins the presidential election. The campaign filed lawsuits in 'Pennsylvania, Michigan and Georgia, laying the groundwork for contesting battleground states as he slipped behind Democrat Joe Biden in the hunt for the 270 Electoral College votes needed to win the White House,' The Associated Press reported."

Biden may steal an election for the elitists, but Democrats will regret it

"In one case, a woman claiming to be an election volunteer in Michigan’s Clark County claimed on video she had discovered a box of 500 ballots outside the counting facility from people who were not on the voter rolls...In Wisconsin, 300 ballots went missing when the Willow Township municipal clerk went home sick and no one could find her, the Washington Post reported. The ballots eventually turned up yesterday, with 157 votes for Trump and 114 for Biden.”

Biden Wins Michigan, Wisconsin as Presidential Election Comes Down to a Few States

"As Tuesday’s voting turned into a fierce battle over a handful of battleground states, Mr. Biden notched important victories in Wisconsin and Michigan, according to the Associated Press, states Mr. Trump narrowly won in 2016. That put Mr. Biden six electoral votes shy of the 270 needed to win, AP tally showed. A victory in Nevada, where the race remained close, would deliver that."

Tight race tests Americans’ trust in system – and each other

"In the two decades since the Supreme Court intervened to resolve Florida’s hanging chad controversy and put George W. Bush in the White House, increased political polarization has frayed the nation’s collective sense of trust and goodwill. Amid declining faith in institutions, the media, pollsters, and each other, the possibility of a disputed electoral outcome may only fuel Americans’ sense of suspicion and cynicism."

"Trump triggered a social media crackdown [Wednesday] after accusing Democrats of trying to steal the election. Neither platform has actually removed his claims. Their policies were set before the election. 'We placed a warning on this Tweet for making a potentially misleading claim about an election,' said Twitter in a statement to The Verge...Trump isn’t the only user whose posts have been labeled. Wisconsin Democratic Party chair Ben Wikler was censured for tweeting that 'Joe Biden just won Wisconsin,' as votes were still being counted."

"'This is a democracy at full work, but clearly very divided,' said Jim Doyle, a former Democratic governor of Wisconsin. 'We are clearly very, very divided by cities and rural, we’re very divided by race. Just look at Wisconsin’s map. And we can’t just be demonizing each other. This is a challenge of leadership that has been building for some time.'"