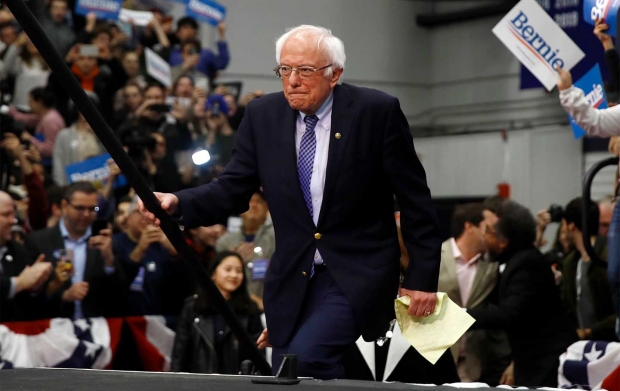 Sanders was followed closely by former South Bend, Indiana, mayor Pete Buttigieg (24%) after the two emerged neck-and-neck from the controversial Iowa caucuses. Minnesota Sen. Amy Klobuchar (20%) finished third in NH as a surprise to many, signaling her campaign's growing strength.

Arguments for and against Sanders dominated headlines. Many in the media framed Sanders' NH win as less meaningful than seemingly major losses for candidates like Joe Biden and Elizabeth Warren. Others, both on the left and right, concentrated coverage more on the apparently growing possibility of socialist values occupying the White House.

Check out some other big stories this week: President Trump Proposes Budget For Fiscal Year 2021; President Trump Praises Bill Barr For Taking Charge Of The Roger Stone Case; and Academy Awards Speeches Touch on Unity and Politics to Mixed Reactions.

Improved Balanced Search tool: : Wondering if there's a story one side isn't covering? Looking for different perspectives on the same issue? Don't wait for AllSides to cover it — use our Balanced Search tool to instantly compare headlines on key issues from left, center and right.

"The New Hampshire results were not so decisive as they were for Sanders when he swept the state’s 2016 primary. But they were still reassuring for the senator, who secured the first clear win of 2020 after a stumbling start in Iowa."

"At the same time, however, New Hampshire handed Sanders a message about what matters most to primary voters in that state and beyond its borders. “About 6 in 10 Democratic voters in exit polls in New Hampshire said they preferred a candidate who can beat President Trump, rather than one who agrees with them on the issues,” explained a Washington Post analysis. Iowa entrance polls had that number at 61 percent."

In aftermath of New Hampshire results, a scramble for black votes

"What’s one thing Bernie Sanders, Pete Buttigieg and Amy Klobuchar all have in common, other than the fact they each had a good showing in Tuesday’s New Hampshire primary? They all come from mostly white states and have little history of electoral success with black voters. They now have only a few weeks to try to change that."

"Perhaps even more than other Democrats, black voters are intensely focused on finding a candidate who can defeat President Trump. In the wake of Biden’s weak showing, there are already signs that his support among blacks is eroding — and that the two billionaire candidates are gaining at his expense."

"Bernie Sanders won the New Hampshire primary Tuesday night. Second-place finisher Pete Buttigieg earned 24.4 percent of the vote, while Amy Klobuchar, not long ago polling in single digits, came out of nowhere with 19.8 percent, a classic New Hampshire outlier result. The words “eked” and “narrowly” are getting a workout in headlines today. There is a Yeah, but… passage in nearly every major media write-up of Bernie’s win. “Sanders cements his front-runner status, but his narrow margins… show how volatile this race is,” is how The New York Times put it."

"In reality, the results for Sanders cut both ways. On one hand, it’s amazing he can win any state after years of propaganda depicting him as a half-dead cross of Hitler and Stalin ... On the other hand, there are signs after New Hampshire that some of the relentless corporate messaging against Sanders is landing."

"Sen. Bernie Sanders (I–Vt.) claimed a narrow victory in the New Hampshire Democratic presidential primary Tuesday night, cementing the 78-year-old democratic socialist's status as the de facto frontrunner for the party's nomination. It's a big victory for Sanders—and a pivotal moment in the Democratic Party's hard left turn toward socialism."

"South Bend, Indiana, Mayor Pete Buttigieg was close on his heels, and Sen. Amy Klobuchar (D–Minn.) was expected to finish a respectable third. Meanwhile, Sen. Elizabeth Warren (D–Mass.) and former Vice President Joe Biden suffered complete collapses, though neither gave any indication that they would drop out. Indeed, for the time being, this is a relatively competitive five-way race."

Chuck Todd: No clue why Sanders is ‘considered a front-runner’

"MSNBC has been criticized for its “Bernie cynicism.” One voter in New Hampshire told the network, on-air that she voted for Sanders because of the network’s negative coverage of his campaign."

"The Vermont socialist is obviously the frontrunner: He’s consolidating his wing of the party, while the rest of the party remains fractured. FiveThirtyEight gives him much better odds of winning a majority of pledged delegates than any other candidate. The similarities between Sanders 2020 and Trump 2016 are indeed uncanny, but it’s worth keeping in mind some of the differences. While Sanders barely won New Hampshire, Trump carried the state by 20 points. In 2016, Trump followed up his New Hampshire blowout with a 22-point victory in Nevada and a ten-point victory in South Carolina."

"If the field remains fractured, [Sanders] has a great chance of winning the most delegates and votes. And even if he lacks a majority, it’s going to be very difficult to deny him the nomination if he has a significant plurality of delegates and votes."

How Sanders Held Off Buttigieg And Klobuchar In New Hampshire

"So how did Sanders win? According to the exit polls, he racked up big margins among demographic groups that make up a good chunk, but still a minority of, the Democratic electorate. Crucially, though, he was still able to win because the rest of the electorate was split among his rivals. For example, “very liberal” voters made up just 21 percent of the New Hampshire Democratic electorate on Tuesday, and Sanders easily beat out Warren to win that group. He tied Buttigieg for the lead among the much larger “somewhat liberal” group, and Buttigieg and Klobuchar split the “moderate” vote."

"According to the exit polls, Klobuchar and Buttigieg were the two top choices of college-educated white voters, at 26 percent and 24 percent support. It seems likely that, if Klobuchar hadn’t been in the race, many of her votes in highly educated communities would have gone to Buttigieg (or vice versa). Given that Buttigieg lost to Sanders statewide by only about 4,000 votes, it’s quite possible that Sanders only won because the Buttigieg/Klobuchar vote was split."

"Democratic senators have been careful not to criticize Sanders publicly, fearing that it could undermine party unity heading into the November general election, which they view as a must-win contest. But they have serious questions about the electability of their self-described democratic socialist colleague and the problems he may create down-ballot for vulnerable Senate candidates."

"Some Democrats still think that Sanders failed to fully embrace Democratic nominee Hillary Clinton in 2016 and blame him for lingering resentment among some of his supporters. They believe this hurt voter turnout and helped President Trump win the White House. The democratic socialist label attached to Sanders comes up with Democrats from more conservative states."

"Bernie Sanders may have established himself as the standard-bearer for the Democratic Party’s leftist wing with his strong showing in Iowa and New Hampshire, but for moderates looking to rally around a candidate to fend him off, the picture just got even murkier."

"The next two nominating states have diverse electorates and could provide a different verdict from Iowa and New Hampshire where whites account for more than 90% of the population. Sanders, who has focused on turning out voters of color, young voters and irregular voters, has a strong chance to win Nevada, with its large Latino population, while Biden is still hoping to call upon South Carolina’s African Americans to resuscitate his campaign."