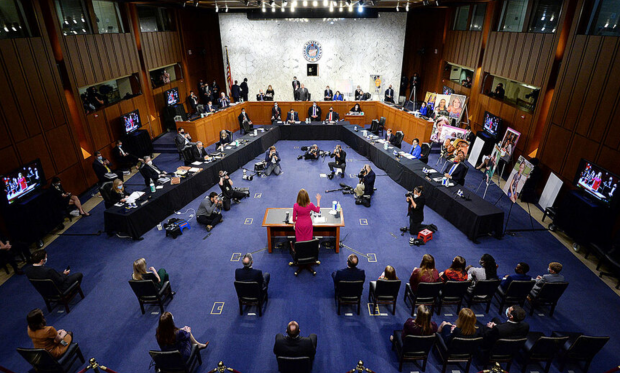 Reports on all sides focused on Barrett's demeanor and stated commitments to nonpartisanship. Coverage from some left-rated outlets framed Barrett's purportedly evasive answers in a critical light, and focused on speculating about her potential future votes. Many voices from the left said her nomination may endanger LGBTQ+ and women's' rights. Coverage from the right was generally less speculative, and framed Senate Democrats' questions as hyper-partisan. Many right-rated voices painted Barrett's performance in the hearings as a positive sign for the court's future.

On the Blog: Barrett use of the phrase "sexual preference" at the hearings stirred a left-right debate over use of the term and potential harm it may cause; Abortion is as divisive an issue as any in the United States. So why does it seem like both parties are shying away from the debate?; and Trump vs. Biden: Chinese Foreign Policy: Compare the candidates' positions and past statements on trade, diplomacy, human rights, national security and other matters related to China.

More from AllSides: Media Bias 101: Learn how to tell the difference between news, analysis and opinion online with our new guide; AllSides is curating a balanced feed of fact checks about the 2020 elections; you can also now support our work and mission by becoming a sustaining member of AllSides. Sustaining memberships allow you to read AllSides ad-free.

"[Barrett] rarely strayed from remarks released by the White House on Sunday, in which she pledged a nonpartisan and deferential approach to judging...The policy decisions and value judgments of government must be made by the political branches elected by and accountable to the people,” said Barrett, a Notre Dame law professor who for the past three years has served on the U.S. Court of Appeals for the 7th Circuit. “The public should not expect courts to do so, and courts should not try.”"

Will We Choose the Right Side of History?

"Barrett is not a horrible person; on the contrary, she seems to be a smart lawyer with an admirable personal story. Yet she’s working with a gang of Republican senators to steal a seat on the Supreme Court. This grand larceny may well succeed. But for voters, this hearing should underscore the larger battle over the direction of the country."

"While Barrett wouldn't say how she'd rule on the Affordable Care Act case that will come before the court Nov. 10, she pledged to "consider all of the arguments on both sides." Democrats brought pictures of children and sick Americans to line the Senate Judiciary Committee's hearing room as a reminder of what's at stake with the healthcare case."

"Their basic problem is that Barrett came across as an appealing Superwoman. Flanked by her husband, six of their seven children and her six siblings, she was flawless in answering those questions she could and in politely sidestepping the traps. Speaking without a single note or any reference books, she exhibited a laser-like memory of things she wrote and said as a professor at Notre Dame law school and, for the last three years, as a judge on a federal Court of Appeals."

Is Amy Barrett the first Supreme Court nominee during a presidential election?

"When President Donald Trump nominated Judge Amy Coney Barrett to serve on the Supreme Court, Democrats – including former Vice President Joe Biden – accused him of defying precedent and becoming the first president to nominate a justice while “a presidential election is already underway.” This was refuted in a tweet by conservative author Douglas Karr, who listed 10 times presidents nominated someone to the country’s highest court during an election year."

"Indeed, Judge Barrett shares the originalist judicial philosophy exemplified by the late Supreme Court Justice Antonin Scalia, but approaches her work with a far more collegial demeanor than her famously irascible former boss. Former colleagues and legal experts say that could enable her to build greater consensus among fellow justices, meaning that if the Senate confirms her nomination, she may deliver not only an extra vote but stronger conservative rulings."